The last day. A splinter unit is in a studio in Swansea shooting a body burn stunt, but I miss that because the main unit are shooting exteriors at Margam. There is heavy rain in the middle of the day and it becomes unsafe to do the chase scene amongst the trees that is scripted. I wander around the castle grounds with Paul, Bali the 1st AD and Mikey from locations in an effort to find somewhere safe but visually suitable in which to re-imagine the scene.
After lunch we find a path in the woods and Paul comes up with a way to stage it all in one dynamic steadicam shot. Rupert shoots it beautifully and as the daylight fades Bali calls a main unit wrap.
Many hugs and goodbyes later, I arrive at the studio to join the splinter unit for their last few hours. They are setting up a wire rig from a cherry-picker against a green screen to shoot FX elements of a creepy girl. While that is being rigged, 2nd unit DP Keefa is getting tight inserts of gory prosthetics on a table nearby, shooting on his Red Dragon and referring to main unit footage on a laptop so he can match my lighting.
Producer Mike asks me to shoot a green screen element of the creepy girl staring while the wire rig is being set up. Rupert and Max arrive with the Alexa and we hook up to the mix and overlay system. This keys out the green in real time and allows us to see the creepy girl against the plate we shot at Margam yesterday. She can’t see the monitor herself so she doesn’t know where she is. I ask her to take two steps to her left. It is EXACTLY like Knightmare. Welcome, watchers of illusion.
Keefa takes over to shoot the wire rig stunt, while I work with Paul to shoot inserts. The art department have recreated little pieces of some of the sets in this cavernous studio space. We also shoot a prosthetic head cast of one of the lead actors having her eyes poked out. Lovely. Then we grab some more green screen elements, including fake blood spraying in various directions. Co-writer and prothestics make-up artist Conal is using a fire extinguisher to spray the blood. It goes everywhere.
We wrap at last, and I’m very glad I got to come along and do this last fun little bit at the studio.
Overall the project has been great, and a fantastic opportunity for me. With a budget ten times greater than anything I’ve previously worked on, and a much bigger crew, and the Alexa and Cooke S4s to play with for five weeks, and all those HMIs, I’ve been quite spoilt. All the other heads of department are older than me and have worked on huge TV shows, and I can safely admit now that I was incredibly nervous when we started, but everyone is very, very happy with how the film looks, including me. Hopefully it will lead to more good things. 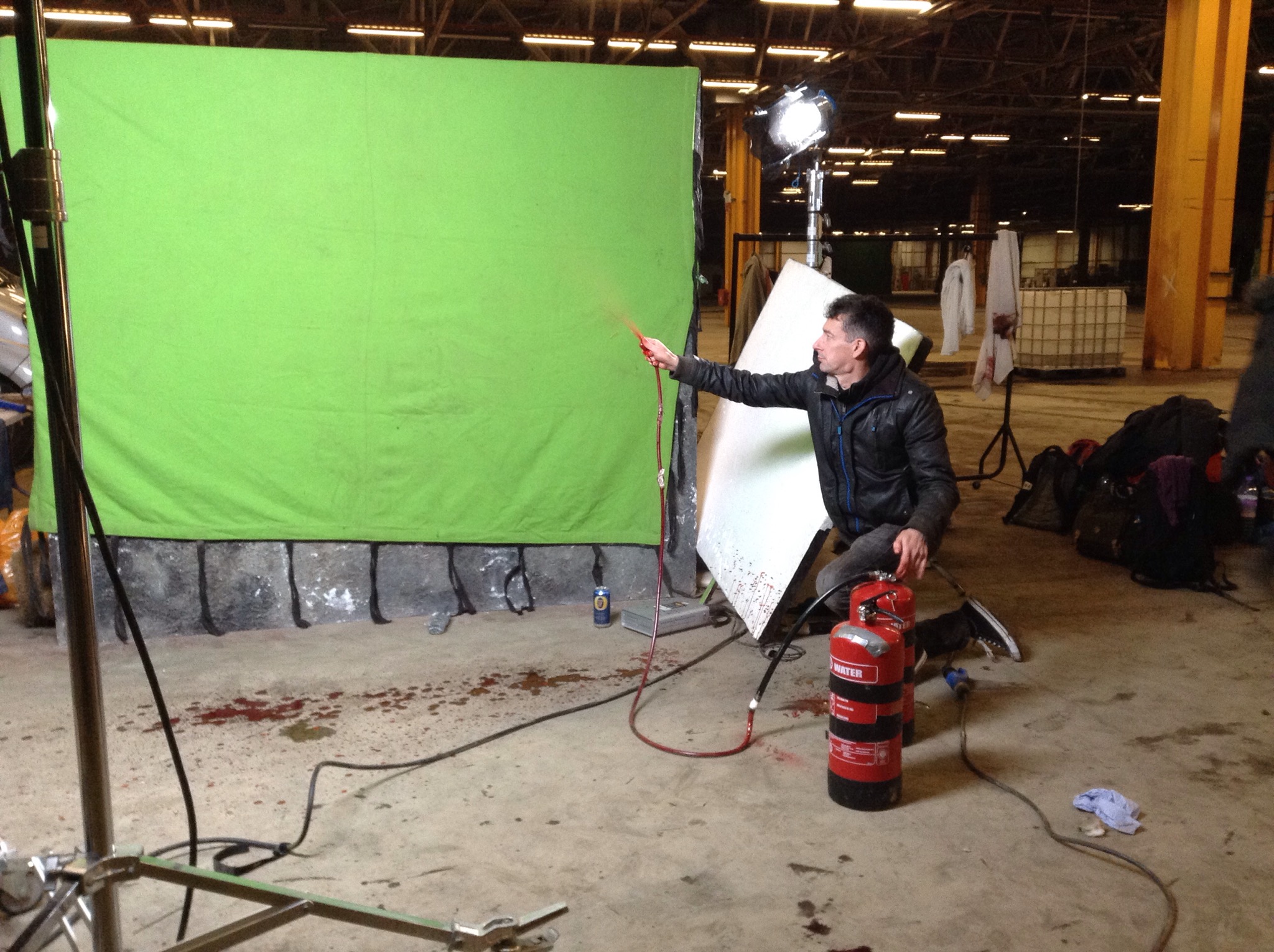