My online course, Cinematic Lighting, is available now on Udemy. It’s an advanced and in-depth guide to arguably the most important part of a director of photography’s job: designing the illumination.

Rather than demonstrating techniques in isolation in a studio, the course takes place entirely on location. The intent is to show the realities of creating beautiful lighting while dealing with the usual challenges of real independent film production, like time, weather and equipment, as well as meeting the requirements of the script.

Cinematic Lighting consists of four hour-long modules: Day Exterior, Day Interior, Night Interior and Night Exterior. Each module follows the blocking, lighting and shooting of a short scripted scene (inspired by the fantasy web series Ren: The Girl with the Mark) with two actors in full costume. Watch me and my team set up all the fixtures, control the light with flags and rags, and make adjustments when the camera moves around for the coverage. Every step of the way, I explain what I’m doing and why, as well as the alternatives you could consider for your own films. Each module concludes with the final edited scene so that you can see the end result.

Students should already have a grasp of basic cinematography concepts like white balance and depth of field. A familiarity with the principle of three-point lighting will be useful, but not essential.

Below is a full breakdown of the course content.

Learn how to block your scene to make the most of the natural light, and how to modify that light with flags, bounce and diffusion, as well as how to expose your image correctly. 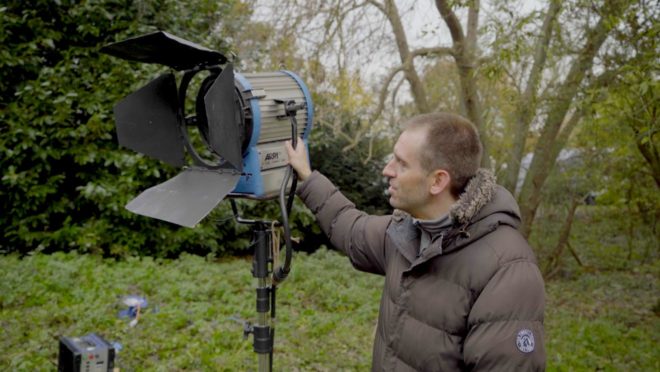 This module introduces some common lighting instruments, demonstrates how to imitate natural light entering a room, and how to create depth and contrast with black-out and smoke.

2.2 Lighting through a Window

3.4 Tweaking for the Coverage

Paint with light on the blank canvas of night; set up an artificial moon; create depth, contrast and colour contrast; and use shadows to your advantage.

Useful links, a full kit list and a deleted scene 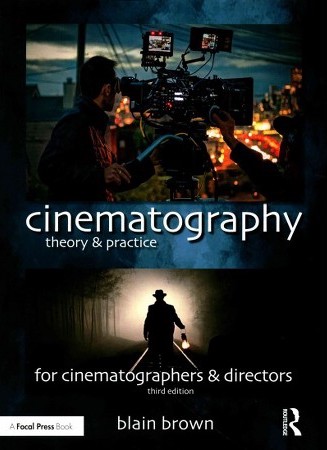 Browsing in Waterstones not long ago, I came across the third edition of this hefty tome. Although it is clearly aimed primarily at the student market, a flick through convinced me that amongst the egg-sucking tutorials there was enough detail to make it a worthwhile reference book for grandma’s shelf.

The front cover proclaims the book to be “for cinematographer & directors”. The first five chapters are certainly applicable to directors, covering the visual language of cinematography, the metaphors of lighting and composition that help tell the story, the classifications of the various shot types, shooting to edit, and such core concepts as the line of action. Any director willing to read the remaining thirteen chapters, however, should really learn to delegate the techie stuff and go read something like An Actor Prepares instead.

These thirteen chapters cover in detail the topics of colour, exposure, digital sensors, dynamic range, colour space, image control, lighting, lenses, camera movement, on-set procedures and data management. As a devotee of the art of lighting, I was disappointed that this huge part of the DP’s role gets only two chapters. Perhaps this is because Brown has written a separate book devoted to illumination, though he has also written a book on digital imaging and that doesn’t stop him devoting multiple chapters in Cinematography: Theory & Practice to this subject.

Some of you may wonder why, in this age when you can google any topic of which your knowledge is lacking, you would buy a book. Firstly, finding something in the index of a book which you know you can trust can still be quicker and more effective than wading through search engine results. (I’ve already grabbed my copy off the shelf once to check the sensor size comparison chart.) Secondly, if you read the book cover to cover, amongst all the things you expected to learn, there will be unexpected nuggets of knowledge which a google search might never have led you to. 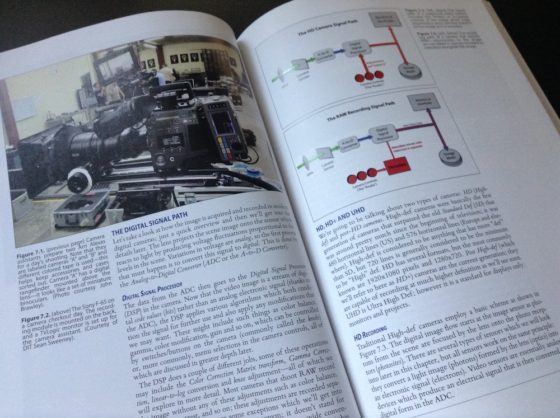 Perhaps the most interesting chapter for me was the one called “Cameras & Sensors”. It taught me loads about how digital sensors capture images, and how they are processed by the camera. And the chapter on “Linear, Gamma, Log” transformed my previously-hazy understanding of log-C into something much more concrete. The chapter on “Measurement” laid out some interesting pros and cons of waveform monitors, histograms, false colours and light meters, explaining how each has its place in choosing exposure.

Cinematography: Theory & Practice is generally well-written and laid out, but sometimes topics creep up in places that don’t quite make sense. It seems illogical, for example, that the chapter on lenses should come much later on than the one on cameras and sensors. Following the light path would have made much more sense to me. Also the proof-reader seems to have fallen asleep for a while, because there are a couple of chapters in the middle sprinkled with typos and minor errors.

If there is a fourth edition, I would like to see the lighting sections expanded, and some more nitty-gritty about how lenses work (Filmmaker IQ’s video on this topic is hard to beat). 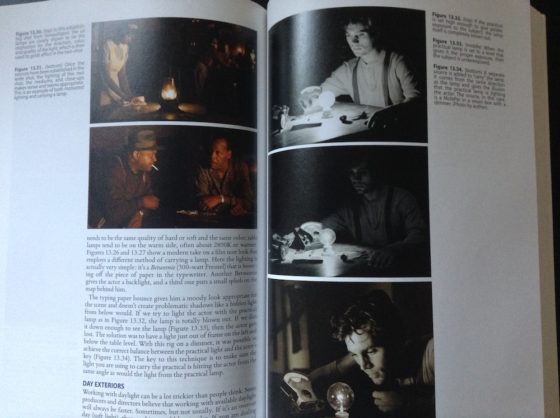 These niggles aside, Brown has produced a very solid reference work. While reading it, I’ve been continually impressed by the depth and breadth of the author’s knowledge  – or perhaps the quality of his research. There is apparently a companion website containing useful videos, but I was unable to get past the splash page (possibly because I’m some kind of bibliophile Luddite).

For any student of cinematography, this book will provide an excellent grounding. As for working DPs, I would challenge any of them to read the book without learning at least something new. Maybe you won’t read it cover to cover, but I’d be surprised if you couldn’t find a few chapters that could helpfully plug some gaps in your knowledge.

Fifteen years ago I made my first professional film, Traction. Okay, it wasn’t professional in the strictest sense – I wasn’t paid – but I racked up a number of important firsts on the project and learnt a lot. Based on a true story, it’s about a teenaged boy undergoing traction for his juvenile arthritis.

Today you can go out and make a film on your smartphone and reach an instant audience via YouTube, which is great, but you need to collaborate with others if your work is ever going to reach its full potential. Here’s how Traction challenged and improved me.

If you’re a new filmmaker trying to raise your game, ask yourself if you’ve pushed in every direction you can to improve your work, or are you stuck in your comfort zone?

Traction: A First Time for Everything

Robert Rodriguez famously said that all you need to do to be a filmmaker is get some business cards printed claiming that you are. Of course there’s more to it than that, so if you’ve just graduated from university or are otherwise starting out in the business, what can you do to get things going?

How to be a Filmmaker

If your new year’s resolution is to get out and make a film, perhaps you need a bit of inspiration to get you going. For the past decade, one of my biggest sources of both inspiration and knowledge of the craft has been DVD extras. The days of DVDs may be numbered, but that does mean you can pick them up cheaply, so there’s no excuse. Here’s my run-down of the most interesting extras out there.

Without doubt the most comprehensive set of extras I’ve ever seen is that on TERMINATOR 2: JUDGMENT DAY. Although a lot of it is text, it leaves absolutely no stone unturned, covering every part of the process from scripting and scheduling through to marketing, release prints, telecine and foreign dubbing. It also breaks down every single VFX shot and special make-up gag in the movie.

PIRATES OF THE CARIBBEAN: DEAD MAN’S CHEST includes a fascinating feature-length documentary following the huge cast and crew as they island-hop with ships full of equipment, building roads as they go to get to some of the remote locations, and weathering a storm that nearly destroys their picture boats. At one point an AD gives some staggering statistics about the shoot; you will not believe how many walkie talkies went missing during production.

The Tarantino-Rodriguez collaboration FROM DUSK TILL DAWN comes with an unusual feature-length doc called Full Tilt Boogie. Rather than dwelling on the action on set, director Sarah Kelly interviews many of the crew – right down to the PAs and runners – to get a unique set of perspectives on the production. Throw in a dispute with the union and the result is a much more revealing doc than we’ve come to expect.

LEMONY SNICKET’S A SERIES OF UNFORTUNATE EVENTS is a movie with a unique look, using traditional techniques like forced perspective and painted backdrops to create its fantasy world. A DVD documentary called A Woeful World explores the incredible artistry that went into this sorely underrated film.

Viewers of the FIGHT CLUB DVD get to come along on the tech scouts – detailed recces where the director tells his heads of department everything he’s going to need at that location so that all the logistical problems can be anticipated.

TITANIC’s four-disc release includes interesting featurettes on previz, the process of creating moving storyboards. Although previz is a CG thing these days, there is much to be learnt from the military precision with which James Cameron plans his deep dives to the shipwreck using miniatures.

For an unedited, fly-on-the-wall view of a small portion of a shooting day on a Hollywood movie (albeit one shot in New Zealand), Peter Jackson’s THE FRIGHTENERS is the place to go.

MISSION: IMPOSSIBLE 2 has a good set of featurettes on the film’s varied stunt sequences, including one which reveals the terrifying way the knife-coming-towards-Tom-Cruise’s-eye shot was achieved.

If cinematography’s your thing, you could do worse than listen to DP John Schwartzman’s commentary track on ARMAGEDDON, where you can learn how to shoot under UV tubes, how to light half a desert and how to make Liv Tyler look her best when she’s on her period.

For a fascinating look at the construction and on-set operation of puppets and animatronics – from little chest-bursters to the huge alien queen – look no further than the ALIENS DVD.

THE MATRIX: REVOLUTIONS’ DVD includes an interesting featurette on the specific use of miniatures for a crash shot in a film which mainly relied on CGI to create its illusions.

Staying with traditional FX, SUPERMAN: THE MOVIE includes a great documentary on how they made us believe a man could fly before the digital days with such classic techniques as front projection and optical compositing.

But if the digital era floats your boat, THE FELLOWSHIP OF THE RING has a nice featurette on digital colour timing (a very new process at the time). In general, THE LORD OF THE RINGS trilogy has a remarkable plethora of extras on all aspects of the blockbuster-making process.

Finally, I’m not sure any DVD extra has yet fully explored the world of post-production sound, but Sound & Music on the bonus disc of SPIDER-MAN 2 gives a nice glimpse. Legendary foley artist Gary Hecker takes us through some of the ingenious combinations of mundane items he used to make such sounds as Spidey’s shooting web and Doc Ock’s claws ripping open a bank vault.

Any good ones I’ve missed? Comment and let me know!