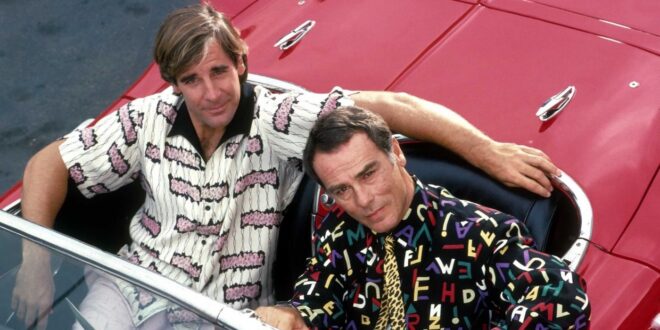 It was with great sadness last week that I read the news of Dean Stockwell’s passing. The actor had a long and varied career, but to me he will always be Admiral Al Calavicci, the holographic observer from the cult 80s/90s sci-fi show Quantum Leap. Only the other week I wrote about how I was such a big fan of this series as a teenager that my friend David Abbott and I made our own version of it.

With Scott Bakula’s time-travelling Doctor Sam Beckett very much the protagonist of the show, the intangible Al was often relegated to exposition and comic relief, both of which Stockwell handled expertly. But every now and then Al would come to the fore and really demonstrate the actor’s range and talent. In tribute to him, here are ten of Al’s best episodes across Quantum Leap‘s five seasons.

When you’re familiar with Quantum Leap you know that Sam and Al’s friendship is one of the series’ few constants. No matter how “Swiss-cheesed” Sam’s memory gets, he always remembers his best buddy Al. So it’s quite strange when you go back and watch the pilot and Sam’s first leap has scrambled his memory so much that he doesn’t even recognise Al, let alone realise that he’s a holographic projection from the future. The uninitiated viewer is similarly in the dark to begin with, watching Al shouting at an unseen character named Gooshie (Project Quantum Leap’s head programmer) and then disappearing through an invisible door. Al would never be an enigma like this again, and it’s a fun way to start a classic buddy relationship. 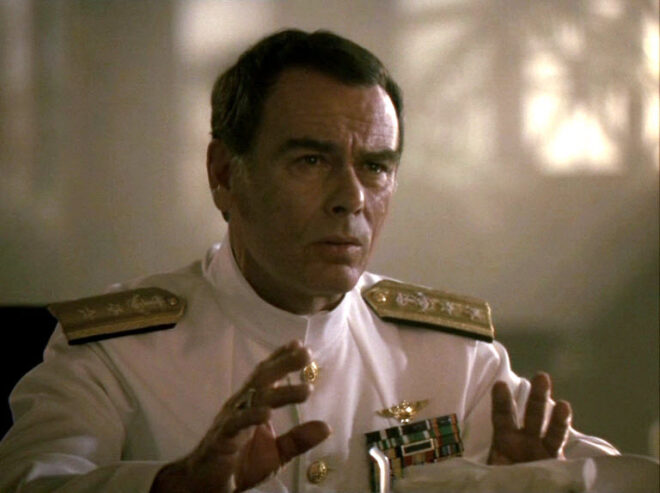 Al and the team at Project Quantum Leap constantly monitor Sam’s time-travelling adventures from their top-secret Stallion Springs, New Mexico base in the future. For the most part this all happens off screen, but the Season Two opener “Honeymoon Express” is one of the few occasions when we get a glimpse behind the curtain. The US Senate is threatening to withdraw the Project’s funding, so Al must attend a hearing to justify the continued expense of staying in touch with Sam. Resplendent in his dress uniform, Admiral Calavicci argues passionately on behalf of his friend, though the funding is ultimately secured when Sam changes history and a new senator is suddenly in charge.

Prejudice versus tolerance is a recurring theme in Quantum Leap, appropriately enough for a show about walking a mile in another man’s shoes. The classic episode “Jimmy” tackles this theme head-on as Sam leaps into the body of a man with learning difficulties. Al pressures Sam not to screw up his mission, which is to ensure that Jimmy holds down a job so that he doesn’t die in a state home. Eventually it comes out that Al’s beloved younger sister Trudy had Down’s Syndrome and died in an institution at the age of 16, hence the hologram’s desperation to stop the same happening to Jimmy. 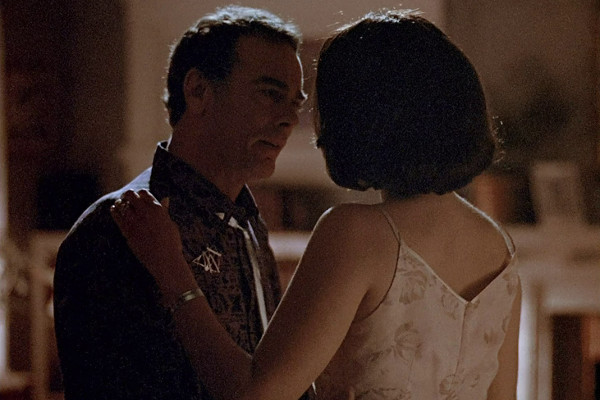 Al’s most heart-wrenching episode is the Season Two finale. His first wife, Beth, remarried while Al was a missing, presumed dead POW in Vietnam. Al never got over losing the love of his life, and a string of failed marriages followed. In “M.I.A.” Sam meets Beth during the Vietnam War and has the chance to tell her that her husband is still alive – a chance he refuses to take, on the grounds that time travel should not be used for personal gain. Al is understandably upset with Sam, a rare case of serious friction between the two friends. The episode ends with an incredibly moving scene – very reminiscent of the movie Ghost, although Quantum Leap did it first – as the holographic Al dances to Ray Charles’ “Georgia” with the unknowing Beth.

The hypocritical Sam spends the opening two-parter of Season Three trying to change his own family’s past for the better, first at his childhood home in Indiana, then in the jungles of Vietnam alongside his older brother Tom. Out of respect for his fellow soldiers, Al spends the episode in his dress uniform again, spotlessly white amidst the mud and greenery. At one point in the story, a war photographer snaps a band of American POWs being led away by the Viet Cong. The episode’s final scene shows us that photo, revealing that one of the prisoners is none other than a young Al. Stockwell was nominated for an Emmy for this episode (having won a Golden Globe for the series the previous year). 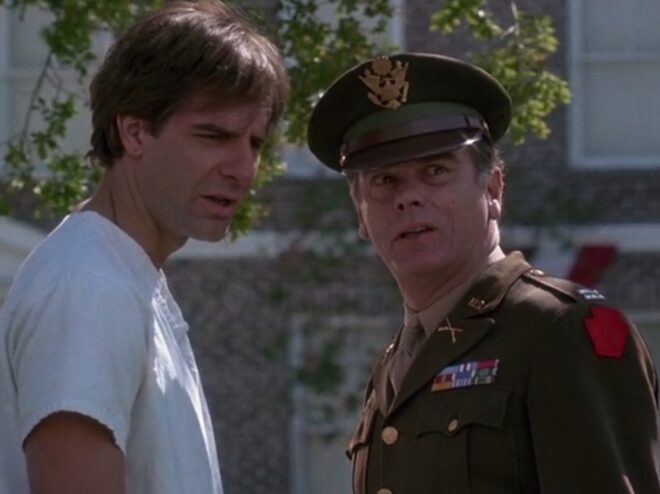 This is my all-time favourite episode of Quantum Leap, because after three years we finally got to visit the Project in the future and meet Al’s colleagues who have been helping Sam behind the scenes all this time, including the supercomputer Ziggy. The reason is that Sam has been catapulted into the holographic imaging chamber in place of Al, who has quantum-leaped. The story is really about Sam and how he deals with being reunited with his wife Donna (whose existence Al has been keeping from his Swiss-cheesed friend), but that’s intercut with hilarious scenes in which Al gets to experience for himself how difficult it is to walk a mile in someone else’s shoes – including having his own memory Swiss-cheesed. Perhaps a little cruelly, Sam revels in being a hologram and giving unhelpful advice while his buddy is floundering, but Dr Beckett soon sees the serious side of the Observer’s job when he must helplessly watch his friend in danger.

Another episode that confronts prejudice, “Running for Honnor” was extremely controversial for American television at the time (1992) as it portrayed homosexuality in the military. In fact, some advertisers threatened to pull out when they learnt of the content. Their narrow-mindedness was shared by Al, who is openly homophobic until the ever-tolerant Sam teaches him the error of his ways. Quantum Leap‘s regulars rarely got to have their own character arcs, so it’s nice to see Al go through a process of change in this episode. 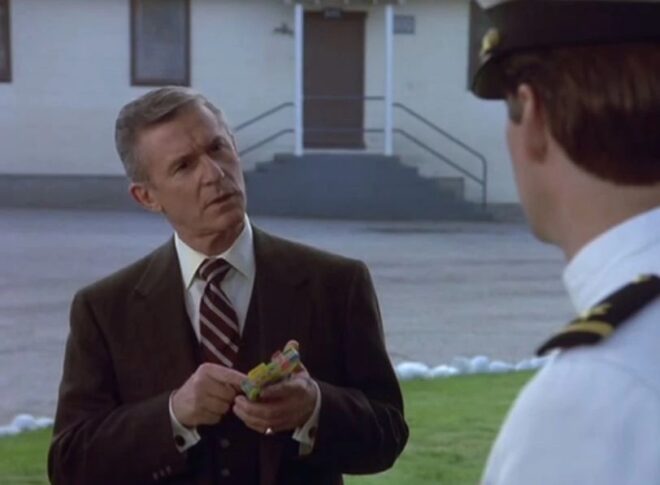 After dancing close to Al’s past life in both “M.I.A.” and “The Leap Home, Part II”, the Season Four finale goes all out and has Sam actually leap into his buddy in 1957. At this time, Al is a young ensign falsely accused of murder by a naval court, an accusation Al easily refuted before Sam accidentally changes history. Now the odds of Al being executed for the crime are rising, finally reaching 100%, at which point old Al is spontaneously replaced by a different hologram. Stuffy and English, Edward St John V couldn’t be more different from his cigar-chomping, womanising, wise-cracking counterpart. Needless to say, Sam saves the day and Al is restored. Elsewhere in the episode, Admiral Calavicci is forced to emotionally relive the death of his girlfriend Lisa Sherman.

By Season Five, scenes taking place in the future at Project Quantum Leap were more common, and this episode has them in spades. Sam has leapt into a serial killer, and like all of Sam’s “leapees”, the criminal is temporarily displaced into the Project’s Waiting Room. When he get holds of a gun and escapes to a nearby city, Al must track him down and bring him back. Apart from his brief experience as a leaper in “The Leap Back”, this is the only time we get to see Al in the role of action hero. 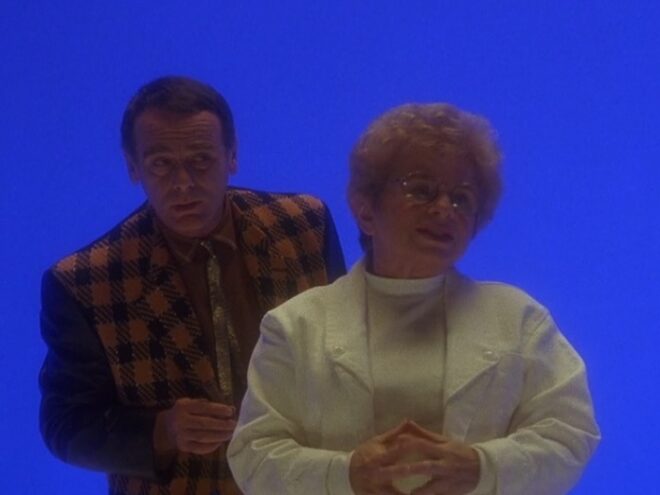 The Waiting Room again plays a key role as it hosts Sam’s latest leapee, celebrity sex therapist Dr Ruth Westheimer. While Sam works to fix the tumultuous relationship of two of Ruth’s colleagues, Al takes advantage of the therapist’s presence in the future to get some advice on his own romantic woes. In fact, this turns out to be the real purpose of Sam’s leap. A highlight of Al’s therapy is when Ruth gets him to use the word “breasts”, but only after he’s hilariously avoided it with every euphemism under the sun.