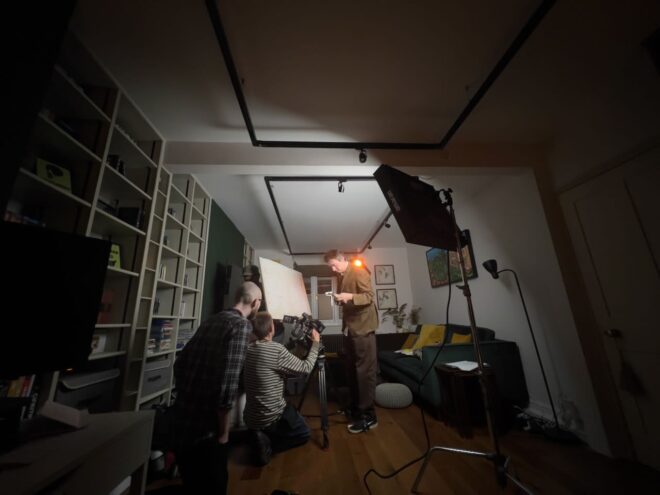 14 months ago production began on the comedy feature Harvey Greenfield is Running Late. Most of the editing is done, and yesterday a reduced crew assembled to shoot one final scene and few odd shots to plug holes.

The crew may have been reduced, but the cast was bigger than it’s ever been. Jonnie and the team managed to pack out Sessions House, a historic courthouse in Ely, with about 60 extras to watch Harvey (Paul Richards) present a case against Choice. Also not reduced was the shot list, an ambitious 21 set-ups to be accomplished in just a few hours. I’m not sure how many we got in the end, but we covered everything so we must have got close.

Since the budget was a dim and distant memory, I shot on Jonnie’s own Canon C200 and lenses. An important part of Harvey‘s visual grammar is the use of wide lenses for stressy scenes, with a 14mm having been the apotheosis throughout production. For this reason, but also for speed, we shot almost everything in the courthouse on Jonnie’s Samyang 14mm, swinging to an L-series 24-70mm zoom right at the end. We couldn’t get hold of a Soft/FX filter to perfectly match with principal photography, but we were able to borrow a 1/8th Black Pro Mist to provide a little diffusion at least.

For lighting, Jeremy set up his Aputure 300D and 600D in an upper gallery at the side of the courtroom, firing into the wall to provide a soft side-light throughout the room. We’d hoped not to have to tweak it much from shot to shot, but it did prove necessary, not least because we needed to look up to that gallery in a couple of set-ups. I wanted to use a lot of negative fill to bring down the ambient bounce off the walls, which had evidently been repainted at some point in the recent past by someone with an Ideal Home subscription. But the 14mm doesn’t leave much room to hide things, so there was a limit to the contrast we could introduce. Adjusting the blinds over the main windows – whenever they were out of frame – became one of our major methods of controlling the light.

Once Harvey had rested his case we moved out into the carpark to get Bryan’s “manic wides”. These grotesque caricatures of the supporting characters, imagined by Harvey at the climax of the film, required each actor, in this case Alan, to deliver key lines from their earlier scenes while I shoved the 14mm lens in their face and dutch-tilted like crazy. We recreated the day-for-night shot grabbed with the limo back on Day 13, covering the car in black drapes and firing the 300D with Urban Sodium gel through a side window – orange being another symbol of stress in the movie. 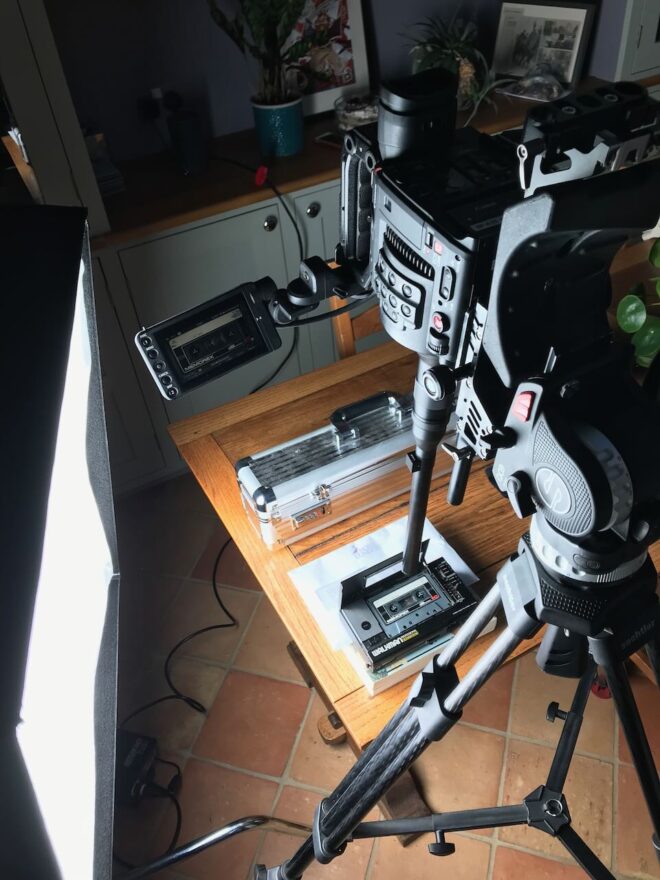 The few of us that were left then regrouped at Jonnie’s house for some ADR and a handful of inserts. The probe lens got another airing to capture a macro shot of a tape recorder, and I got to double as Harvey’s hands flicking through a book. In Paul’s very last shot he was out of focus, due to a lack of continuity-matching make-up, with the book sharp in the foreground.

The final shot of all was Cat, the editor, dropping some Post-its into frame and Jonnie, clad in Harvey’s jacket, picking them up. Not a grand shot to go out on, but one that nicely sums up the collaborative, all-hands-on-deck nature of no-budget filmmaking. It’s been a fun ride.

Read all my Harvey Greenfield is Running Late posts: