In a conference room at a business centre in north Cambridge we set up for a scene in which the titular Harvey arrives titularly late for a big meeting at work. Here we were joined by my good friend Alan Hay, who voiced all the pre-recorded male characters in the stage play, and now portrays Harvey’s overbearing boss Bryan on screen. 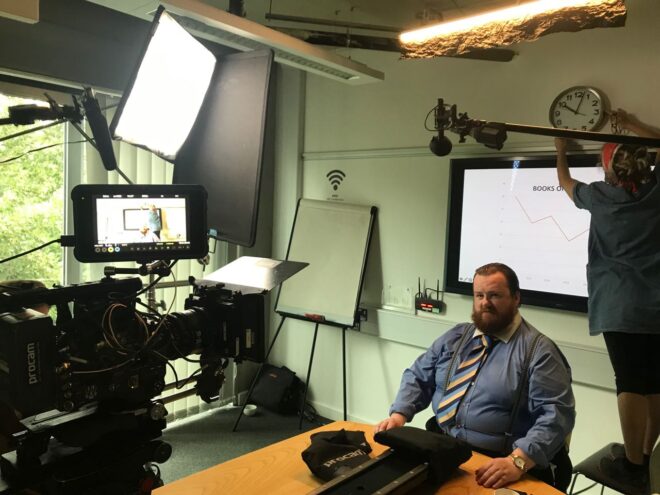 A TV monitor in the background of Bryan’s shot, displaying relevant graphics, gave us some trouble. Neither the 50Hz or 60Hz “flicker free” modes in the monitor’s menu lived up to their names. The best – though not perfect – results were achieved by setting the camera’s shutter to 144°, which works out as 60Hz at our frame rate of 24fps. (Next week’s post will be dedicated to the maths behind this. I bet you can’t wait.)

Stephen and James rigged several Astera tubes to the ceiling, which we mostly used to give everyone a tungsten-coloured backlight whichever direction we shot in (Harvey’s stress colour again). The key light was motivated from the window, which we weren’t able to light from outside of, but we generally used the Litemat 2S to punch up or wrap the natural light from that direction. We used floppy flags on the opposite side of the room to stop too much ambience from the atrium spilling in.

Unfortunately by the time we wrapped the meeting scene we were left with a difficult choice: to rush a long and funny scene in Bryan’s office, or to postpone it for some future pick-up shoot when we could do it justice. Jonnie wisely chose the latter, allowing us to decamp to a private home in Arbury and get ahead with the scenes set in Harvey’s house.

First up at the house was a happy flashback of Harvey and Alice dancing in the bedroom, which Amanda had dressed in calming shades of green. We shot towards the window at 48fps and supplemented the natural light with a single Astera tube in a corner. 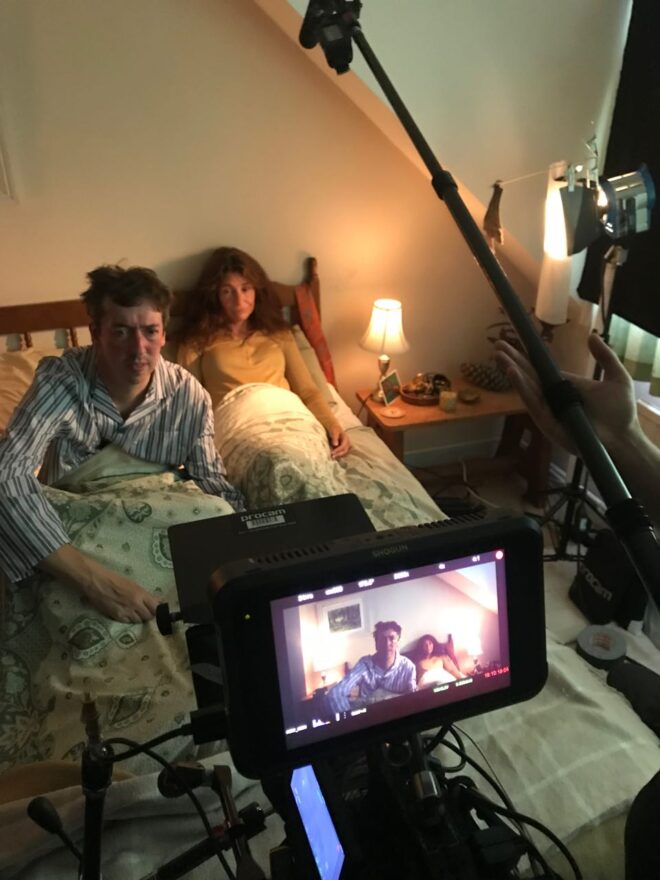 Next was a less positive flashback set at night. As it was still broad daylight I closed the curtains, framed out the window and set the white balance to 3600K to turn the remaining light seeping through the curtains into a dim nighttime ambience. I had asked Amanda to provide matching practicals on the bedside cabinets, which we now turned on and dimmed to get a nice warm orange glow. This looked great but left the actors’ faces very under-exposed, so we added a 300W tungsten fresnel motivated by one of the tablelamps. (The thing you see hanging in front of it in the above photo is a makeshift flag to stop the other tablelamp from casting an unrealistic shadow.)

Then it was back to daylight – again natural light supplemented by an Astera – and the camera had to stay locked off so that Jonnie could jump-cut to this shot from the same angle at night. Stephen and James set up the lighting while the daylight faded. The main element that I wanted was a streak of sodium streetlight through a gap in the curtains, again part of the stress colour theme, which was achieved with the Aputure 300D gelled appropriately. We wanted to give the impression that this was bouncing off the wall and edge-lighting Harvey in his second position, but in reality we used the tungsten 300W fresnel – now hidden on top of the wardrobe – to get this effect. We bounced two Astera tubes, set very blue with a bit of green mixed in, off a wall to provide ambience. 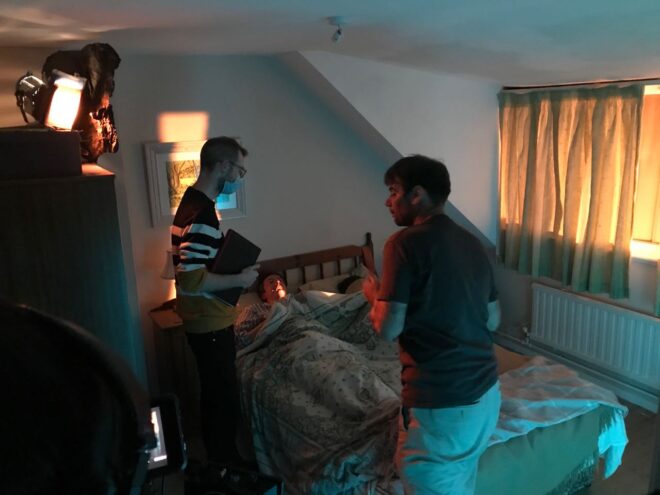 Overall the frame was still pretty dark, so I decided to do something I’ve seen advised for night scenes before but never actually done: I reduced the ISO by one stop and opened the iris to compensate. Read my article about ISO if you want to understand all the ins and outs, but essentially doing this allowed one more stop of light to reach the sensor – that’s more information to grade with – without increasing the apparent brightness of the image.

Back in the house, this time downstairs in the kitchen. We had three daylight scenes to shoot here, and the lighting approach was to push in soft light through the windows using the Litemat or an Aladdin, with some harder streaks where appropriate from the Aputure. Hiding another Aladdin on top of a cabinet and firing it into a corner of the ceiling was a good move by Stephen to raise the ambience in the room while still keeping some directionality.

Our first task today was to return to the cemetery and pick up a dropped shot from day 8. Then it was another Steadicam/rickshaw scene on an Ely street where rain, traffic and a recalcitrant beer can combined to make things quite tricky.

After lunch we had a strict two-hour window in which to shoot three scenes with a hired limousine. The first required it to be driving around, so Filipe (sound mixer), Olga (focus puller) and I squeezed into the front of the main cabin, shooting down the length of the vehicle on the 14mm to where Paul and Alan’s characters were sitting at the back. Jonnie rode in the front passenger seat and watched the monitor over my shoulder. Next to him was an Aladdin which I could use for fill when necessary, but mostly I relied on the dynamic natural light. The heavily tinted windows were a big help, allowing me to retain most of the detail in the sky outside without under-exposing the talent. 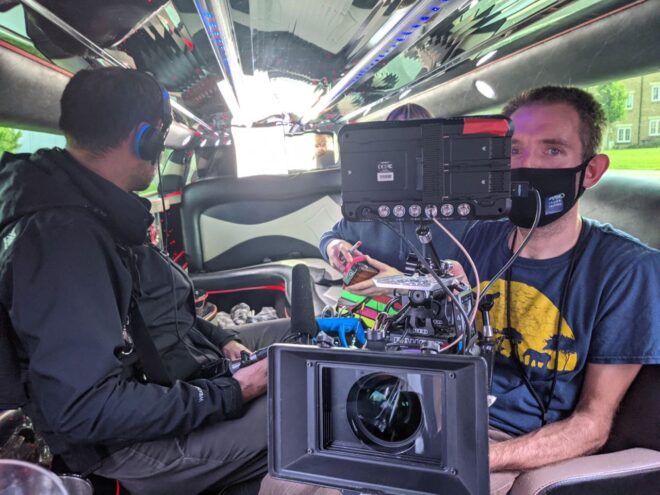 When we returned to base, Stephen had all the flags, bolton and lights ready to move into position around the limo for the night scene. His custom-built LED was gelled with Urban Sodium again to key Alan, and an Astera tube inside the limo provided the impression of a passing ambulance.

Then we were left with less than 25 minutes to capture a daytime dialogue scene around the limo. Jonnie had storyboarded it as three set-ups but there was only time for one. Rupert came to the rescue, quickly balancing his Steadicam as Jonnie devised a camera move that would hit all the needed beats.

After a couple more Steadicam shots we moved on to a scene in a hospital car park, a rare moment of calm for the beleagured Harvey. We shot this mostly on the slider, capturing the dialogue in another single developing shot that taxed poor Filipe again but set exactly the right mood for the story. The natural light was very shapeless, so Stephen set up some floppies on one side and bounce on the other.

The day brought principal photography to an end for Stephen and for leading man Paul Richards, both of whom have done stellar work despite the long hours and high energy levels required.

Just after I wrote this Jonnie sent me a rough edit of the limo/hospital sequence and it has turned out very nicely indeed. 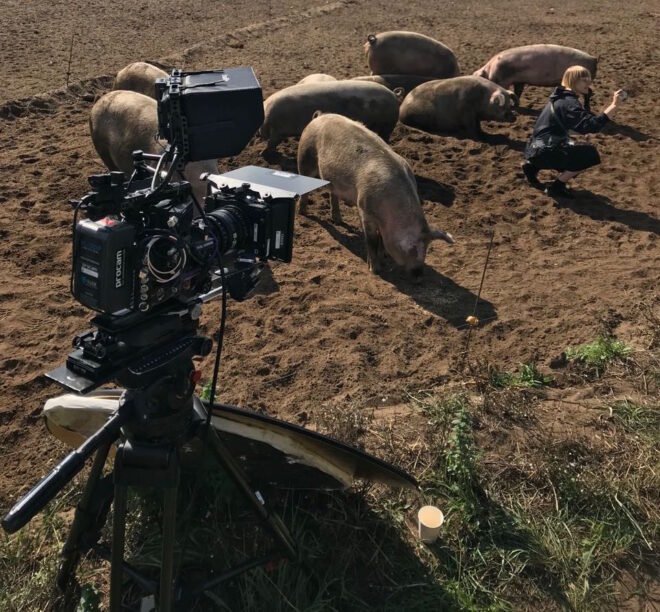 We convened at a farm near Mildenhall to film Billy the pig farmer, one of the many people who hassles Harvey by phone during the story. In a last-minute casting coup Billy was portrayed by 1st AD Rob Oliver with the unscripted addition of his mother Shirley. A comedy duo to be reckoned with. Between takes we scattered food around to entice the porcine supporting artists into the right positions.

After completing this sequence we all took it in turns to hold a piglet. I’m not sure why.

The final scene of principal photography was a spoof charity appeal for “No More Racism UK”. We shot this down at Ely riverside again, where a crowd steadily gathered to watch us film an old white lady throwing bread at a black couple. We captured the whole thing on the slider with the 50-100mm zoom at 48fps and with the Soft FX 1 for extra cheesiness. To get the depth of field as shallow as possible with our limited ND filters I went down to ISO 250, the downside being a reduction in highlight detail which threatened to blow out the feathers of a white swan in shot. I’m sure that’s symbolic somehow.

We wrapped at the astonishingly reasonable time of 3pm and reconvened in the evening for a pizza-fuelled celebration at Othersyde. The shoot was great fun, the whole team has worked really hard, and I look forward to seeing everyone again for the pick-ups.