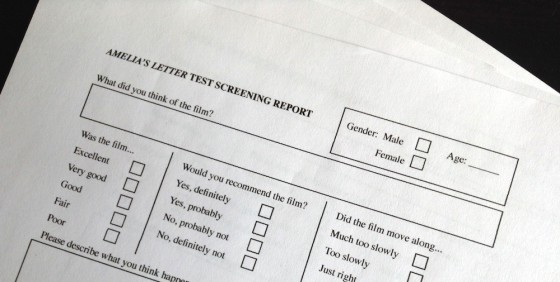 On Saturday morning, Broadway in Nottingham kindly gave us the use of their lounge to screen the present edit of Amelia’s Letter to a select audience. As is normal for a test screening, the film is still in a very rough state, but the aim was to identify the weak points, primarily in terms of pace and clarity.

The audience was attentive and gave very useful feedback, though there wasn’t so much of a consensus as there has been at my previous test screenings. I think this might be par for the course for a film based on mystery. Some people like not knowing what’s going on, and some people don’t.

Personally, I like clarity. When I used to make amateur films as a teenager with my friend Dave, I remember how much it galled me when he reported that his mum had watched our latest cinematic effort and couldn’t follow the storyline. So I think we will do what we can, with the footage we have, to make Amelia’s Letter a little clearer.

Some people wanted the film to be longer, to reveal more about the minor characters, while others felt it could be shorter. Since we can’t make it longer, we’ll try to nibble some more out of the first few minutes to get it moving more quickly.

Test screenings usually throw up some surprises too, and this one was no exception. Some people briefly thought that a middle-aged character was supposed to be a future version of a younger character. (This is why, like Chris Jones says in The Guerilla Filmmakers’ Handbook, you should avoid casting actors that physically resemble each other.) And more than one person failed to realise that some minor characters were supposed to be writers, despite these characters spending much of their screen-time sat at typewriters. Who would have seen that one coming?

There was plenty of positive feedback. Amongst the words and phrases people could tick to describe the film, almost everyone ticked “well acted”, with “emotional”, “involving” and “I want to see it again” coming in joint second.

All in all, a useful exercise. Hopefully it won’t be long now before we can get the edit locked and move onto music, grading and sound design.