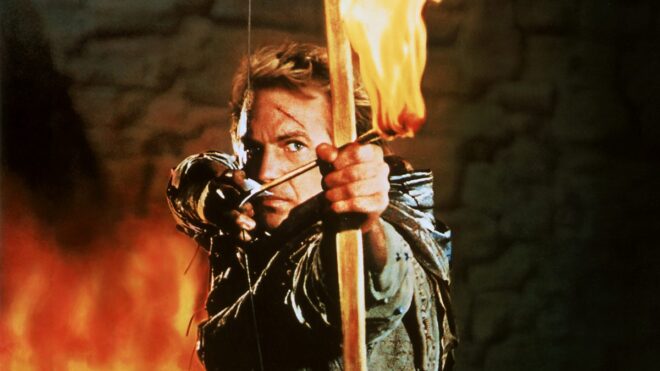 “I’m going to carve your heart out with a spoon!”

Alan Rickman’s scenery-chomping Sheriff of Nottingham may be widely considered the best thing in Robin Hood: Prince of Thieves, but there is plenty more to enjoy in this classic action romp even now, 31 years on from its release.

“There was gold on the page,” claimed executive producer David Nicksay of the screenplay by Pen Densham and John Watson, which he read in early 1990. Both Fox and Tri-Star were working on their own Robin Hood movies, so Nicksay’s comparatively small company, Morgan Creek Productions, had to move fast to avoid being buried at the box office.

Director Kevin Reynolds was hired for his previous collaborations with Kevin Costner, having given the star his big break on 1988’s Fandango as well as directing part of Dances With Wolves. Following a scant ten weeks of prep, Reynolds launched into shooting Prince of Thieves against the ticking clock of the approaching winter. 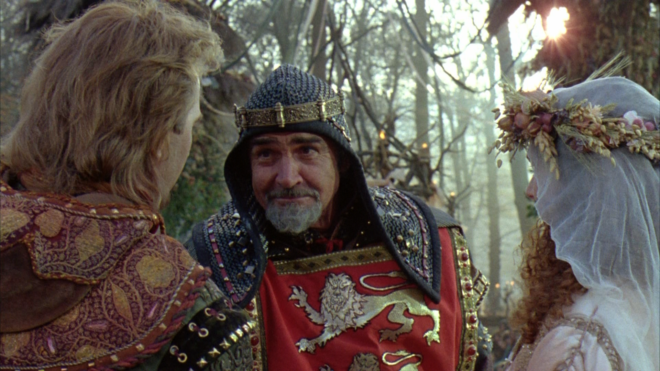 The English weather was as cooperative as you might imagine, but no-one could have predicted that unusual winds would cause Heathrow to divert all its flights over the Buckinghamshire forest standing in for Sherwood, playing havoc with the sound.

Kevin Costner – who had coincidentally been offered and turned down Fox’s Robin Hood – arrived from the Dances With Wolves editing room just three days before filming began. His very first scene required him to jump out of a rowboat on the Sussex coast and wade to shore, even as his woollen cloak soaked up half his bodyweight in water. Later he spent four days immersed in the freezing waters of Aysgarth Falls, North Yorkshire, for the sequence in which his character battles Little John.

The crew also shot in Wiltshire, Northumberland and even Carcassonne in France, but never set foot in Nottinghamshire. The film’s most derided geographical anomaly is the stop-off at Hadrian’s Wall, which somehow falls on Robin’s route from Dover to Nottingham. 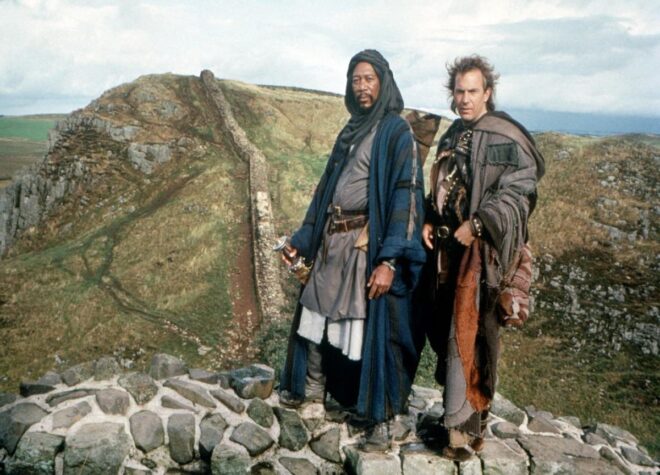 The character’s accent is also geographically challenged, partly due to a disagreement between the two Kevins about whether an English Costner would be distracting for audiences. The result is best summed up by the man himself on the DVD commentary: “Well, there’s my dumb-ass accent. It was something I wanted to do, and I wasn’t very good at it.”

Test screenings were positive but showed that Rickman’s sheriff – whose part had been beefed up by Reynolds in last-minute rewrites – was more popular than Costner’s hero. The producers insisted on redressing the balance in the edit, leading to Reynolds storming out and a 2009 director’s cut that reinstated Rickman’s extra material. (The two Kevins got over their differences in time for 1995’s Waterworld… and I’m sure they’re both very glad about that.)

Legendary cinematographer Doug Milsome ensured that Prince of Thieves’ visuals were beyond reproach. To capture sweeping views of the forest hideout he mounted a Wescam – a camera stabiliser typically used for helicopter shots – to a truss erected between the trees. 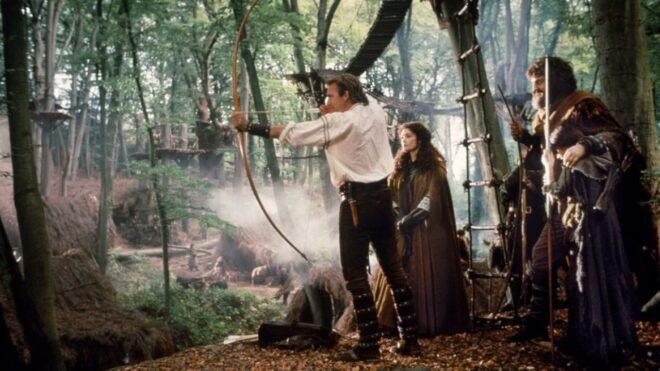 The famous arrow POV shot, hurtling through the woods, took a week to plan and execute. A static arrow was blue-screened over a travelling forest plate photographed at a stately one frame per second. Originally intended just for the trailer, the shot caused such a buzz amongst the public that it was written into the film itself.

Another highlight is the score by Michael Kamen, who based his love theme on an actual medieval tune. For the tie-in single, Bryan Adams and his keyboardist Mutt Lange took that same theme and added lyrics, turning it into the power ballad “(Everything I Do) I Do It For You”. The track garnered an Oscar nomination and won a Grammy, and spent 16 weeks at the top of the UK charts, a run still unbeaten today.

The achievements of the film itself were more mixed. Alan Rickman bagged a Bafta for his spirited turn as the Sheriff of Nottingham, while Kevin Costner won a Golden Raspberry for Worst Actor, and Christian Slater was nominated for Worst Supporting Actor. The lacklustre reviews did no harm to the box office though; Robin Hood: Prince of Thieves was the second-highest grossing film of 1991, surpassed only by Terminator 2: Judgment Day.

And what about the other Robin Hood films that Reynolds and co had raced to beat? Tri-star’s project never left the starting blocks, while Fox’s effort, starring Patrick Bergin and Uma Thurman and exec-produced by Die Hard’s John McTiernan, went straight to television. In fact the only film to challenge Prince of Thieves for many years was the Mel Brooks comedy, Robin Hood: Men in Tights. This parody is surely the ultimate evidence of Prince of Thieves’ cultural impact. 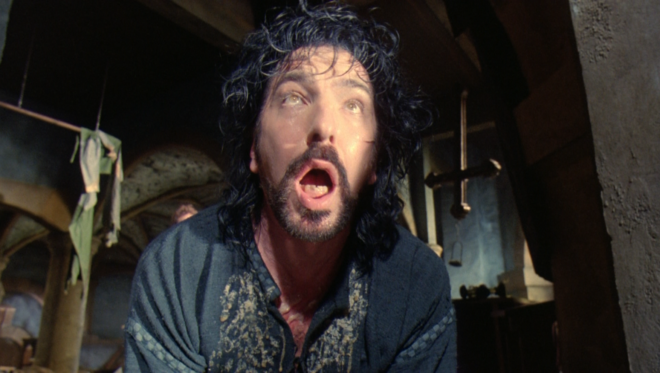