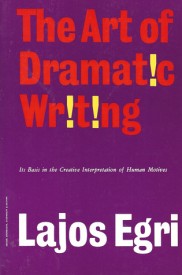 On the advice of my friend and mentor Carl Schoenfeld, I’ve just read Lajos Egri’s The Art of Dramatic Writing. Penned in 1946, it’s a manual for playwrights, but it drills to the core of what’s important in drama, and as such is just as useful a read for a screenwriter or filmmaker.

The book is divided into four sections: premise, character, conflict and general.

What Egri calls premise I would call theme, though he soundly argues that calling it premise forces you to think of it as almost a pared-down logline, which may make you more inclined to treat it with the appropriate importance. He suggests that a premise should have three parts, indicating the dominant trait of the lead character, the conflict and the ending. Examples he gives include “honesty defeats duplicity”, “bragging leads to humiliation” and “poverty encourages crime”. Reverse-engineering a few recent movies along these lines might give us “instinct trumps conformity” (The Heat), “love transcends human flesh” (Transcendence) or “the powerful triumph over the weak” (Captain Philips). Egri emphasises that the premise must be the very DNA of the script, informing every line and every action.

We have all heard people saying that characters in a film must be three-dimensional, but have you ever wondered what those three dimensions are? Egri’s answer is: physiology (physical appearance, health, heredity), sociology (class, job, religion, home life, etc.) and psychology (morals, ambition, temperament, IQ, abilities and so on).

The premise acts as a goal to your characters, especially your lead, and powers their development – Sandra Bullock’s loosening up in The Heat, for example. Egri reminds us that character development must be a smooth process, so a character who goes from anger to love must pass through many intermediate stages such as irritation, ambivalence, interest and affection. Missing out these transitions, Egri warns, will result in melodrama.

“A weak character,” says Egri, “is one who, for any reason, cannot make a decision to act.” He goes on to explain that, in theory, any character can be strong if you choose the right “point of attack”, in other words if you write about a period in their life when they HAVE made a decision to act, when they are ready for conflict.

To generate rising conflict, Egri asserts the need for “a clear-cut premise and unity of opposites, with three-dimensional characters.” He defines a unity of opposites as a scenario in which the protagonist and antagonist want precisely the opposite things. This can apply not only to the overall thrust of the story, but to individual scenes within it too. Egri urges the reader not to fall into the trap of “static” conflict, where characters argue back and forth without escalating the situation.

Being aimed at playwrights, the book considers dialogue as the only means of revealing plot, character and conflict, but in a film conflict could be literal (as in an action film) or expressed through some other non-verbal means.

Overall, Egri’s breakdown of a script’s essential elements provides me a with useful template with which to begin interpreting a screenplay. Many people have produced books attempting to distill the essence of good writing, and it is largely a matter of taste which one you find most useful. Personally, I found The Art of Dramatic Writing clear, concise and refreshing, and I’m sure I’ll refer to it frequently.

“The Art of Dramatic Writing” by Lajos Egri