In 2013 Katie Lake and I made a little puppet film for the Virgin Media Shorts competition, called The One That Got Away. Although it failed to make the shortlist, I believed it had legs, so I started entering it into festivals. Today I’m going to talk about how it fared. A little later in the year I’ll do the same thing for my other 2013 short, Stop/Eject, and between the two posts I hope to help you answer the question, “Is it worth entering my film into festivals?”

To start with, here’s the film.

It cost next to nothing to make, so I decided to enter it only into festivals that had no entry fee. I created accounts on the festival submission platforms Short Film Depot and Reel Port. Both sites have systems whereby you purchase credits (known on Short Film Depot as ‘reels’ and on Reel Port as ‘stamps’), which you can then use to pay for submissions. As far as I know, this payment is purely a middleman fee and doesn’t go to the festivals themselves. Both sites allow you to upload your film, which is then sent automatically with your submissions. 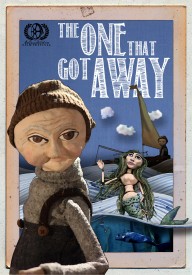 Short Film Depot allows you to upload your first film for free, with subsequent uploads costing 3 reels (€3 – currently about £2.15). Each festival submission costs 2 reels(€2 – about £1.45).

I entered The One That Got Away into 36 festivals over the course of about 18 months: 23 entries on Reel Port, 12 on Short Film Depot, and one directly to the Worcestershire Film Festival (which was completely free).

The total cost was €98.95, or about £71 plus currency exchange fees – that’s about twice the film’s budget! I should point out that I made one exception to the ‘no entry fee’ rule: that total cost includes €12.50 I spent on entering the film into Encounters. This was a discount rate because I was entering Stop/Eject at the same time. Why did I pay for Encounters? Because of their Depict Competition (which The One That Got Away didn’t actually qualify for, being over 90 seconds) they seemed to be associated with very short films, and with hand-made animation-type films. Plus I knew the festival director from doing FilmWorks.

How many of those 36 festivals did the film get into?

Two. Worcestershire Film Festival, and Belo Horizonte International Short Film Festival in Brazil. Belo Horizonte’s notification email told me that The One That Got Away “was one of the 12 selected for the Children’s Exhibition, among 2,700 subscribers.” That gives you an idea of the kind of odds you’re up against with a festival submission. Suddenly 2 out of 36 doesn’t seem so bad.

I have great admiration for what the guys at Worcestershire Film Festival are doing, and it was really great to go along and see the film with an audience, but at the moment it’s quite a new and low-key festival. For all I know, the same is true of Belo Horizonte, though I wasn’t about to fly to Brazil to find out. (They were not offering to pay my travel.) I’d estimate a total audience reach of about 100-150 people for those two screenings. Less, I would guess, than it’s had online. And apart from a little bit of buzz amongst my social media network generated by the announcement of these festival selections, there have been no other benefits.

I leave you to decide for yourself whether you think it was worth all those entries and the cost of £71. A full list of festivals entered follows.

Look out for my future post on Stop/Eject’s festival entries. Since that film was crowd-funded, we were able to take a very different approach and enter a lot of top tier festivals, so it will be an interesting comparison.

The One That Got Away submissions via Reel Port:

The One That Got Away: Festival Results