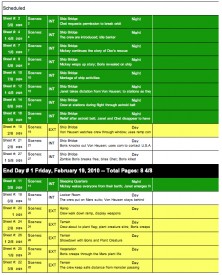 The director of photography is one of the crew members who has the greatest influence over the pace of a shoot. How long you take to light each set-up has a huge impact on how much gets done in a day. So it’s only natural that you are usually consulted on the shooting schedule during preproduction. More often than not, your pleas for more shooting days will be ignored because there simply isn’t the money. Nonetheless, it’s your duty to feedback on the schedule, and if you can be specific about your concerns then you may occasionally succeed in getting tweaks made. And if not, at least you can say, “I told you so.”

Here are some things I’m looking for when I assess a schedule.

A good 1st AD should have thought of most if not all of these things, but it never hurts to check them out yourself.

Want to learn more about scheduling? Check out my posts on scheduling my feature film Soul Searcher and my short film Stop/Eject.

10 Things to Look for in a Schedule