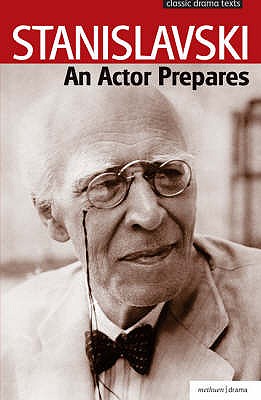 I’ve just finished reading the classic thesping manual An Actor Prepares, by Konstantin Stanislavski. Don’t worry, I’m not planning a career switch to the other side of the camera, just endeavouring to become a better director by deepening my understanding of acting.

Despite being 80 years old and translated from Russian, the book is surprisingly accessible. It takes the form of a fictional diary in which an eager drama student, Kostya – whom Stanislavski apparently based on his younger self – records his lessons with teacher and director Tortsov, representing the author’s older, wiser self.

The first instalment of a trilogy which continues with Building a Character and Creating a Role, An Actor Prepares outlines the mental processes which Stanislavski believed are required in order to stimulate the subconcious inspiration from which all truly great acting springs. As such, the book focuses on work that would be done by an actor on their own, before beginning their relationship with a director.

In fact, Tortsov/Stanislavski goes so far as to suggest that directors can often interfere with an actor’s preparation by trying to impose their own themes and motivations on them. “An actor must find the main theme for himself,” he says. “He must not be forcibly fed on other people’s ideas, conceptions, emotion memories or feelings. His own appetite must be tempted. The director’s job is to get the actor to ask and look for the details that will put life into his part.”

Elsewhere in the book, there is a great tip regarding objectives (read: motivation). “You should not try to express the meaning of your objectives in terms of a noun… The objective must always be a verb.” The author suggests that powerful objectives often start with “I wish…” It seems to me that if a scene is going off-track, sitting down with the actor and formulating a suitable objective beginning with “I wish” might be a constructive way to get back to the heart of the narrative and characterisation.

Perhaps one of the best-known elements of Stanislavski’s system is the “magic if”. The theory is that by asking “if” questions, maybe as basic as, “What if I was in the same situation as my character?” a performer – or indeed a director – can very quickly get to the truth of a role, a scene, or a script. By probing scenarios that don’t even occur in the script, for example, “What would my character have done if  such-and-such an event happened?” we can start to build a more nuanced character.

Stanislavski also stresses the importance of the “super-objective”, the over-arching motivation which drives the character through the piece, and “counteraction”, forces working against the super-objective, which are often embodied by the antagonist or villain. This is a good reminder for directors and writers not to lose sight of what the hero is ultimately trying to achieve, and to derive the maximum dramatic conflict from the hero’s clash with the people and obstacles in their way.

Aside from these nuggets of wisdom, the principle thing I’ve come away with is an increased understanding of and respect for the craft of acting. It must require an extraordinary level of mental discipline to control your every thought and action – or rather, to immerse yourself in the character to such a degree that your every thought and action naturally become those of the character – while simultaneously hitting your marks, finding your light, delivering the lines put in your mouth by someone else, remembering your continuity, executing the director’s notes, and ignoring all the crew and equipment in your face.

Which I knew already, of course, but reading An Actor Prepares very much brought it home to me.