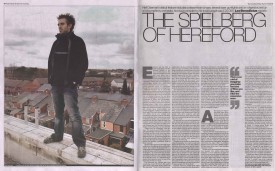 Several years ago The Guardian wrote a lovely big article about me under the headline “The Spielberg of Hereford”. I had just completed Soul Searcher, a feature-length fantasy-action movie shot in this sleepy backwater of the rural West Midlands. The project had not been without its challenges – from a malfunctioning camera to a striking stunt team – but shooting in the provinces wasn’t one of them.

Yes, on the face of it, basing yourself away from the vast majority of actors, crew and facilities is inconvenient. I have long since accepted that my casting calls mentioning a shoot far outside the M25 will get a limited response, and that I will have to travel to London to hold auditions.

Crewing can seem similarly problematic, but in fact there are many excellent TV and film technicians hidden away in rural areas, constantly driving to London to work, but keen to be involved in anything more local if they get half a chance. It’s a novelty, and that’s an advantage.

Londoners can often be cynical about filming; it’s a business like any other. Most locations in the capital will whip out a rate card at the first whiff of a scouting crew. But out in the sticks, many property owners will let you shoot on their premises free of charge for the rare glamour of a brush with the film business. On Soul Searcher I only had to pay for a single location. At least two others told me they would charge me, but never did. Their accounts departments presumably had no procedure or precedent for raising an invoice for location fees, and so overlooked it.

The savings a regional producer makes on locations are often countered by an increased travel and accommodation budget. But there are benefits to this accommodation that, to my mind, outweigh the financial burden. A cast and crew staying away from home together will bond far more than one that scatters to the four corners of the tube map every night. This means improved morale and more realistic on-screen relationships between actors.

Regional filmmaking has more potential now than it’s ever had. Established networks like Talent Circle may remain London-centric, but social media enables us to connect quickly with others in our area – Shooting People’s regional “Shooters in the Pub” Facebook pages, for example, or Herefordshire Media Network, through which I found the editor for my last short film, Stop/Eject. And in an age when everyone’s looking for a hook for their crowdfunding campaign, the declaration “shooting in YOUR home town” can help you connect to potential sponsors.

Finally, regional press will often jump on local film projects, providing great free advertising for your crowdfunding campaign, cast/crew call or screening. I’ve appeared on BBC Midlands Today on three separate occasions, but I can’t imagine BBC London News covering yet another struggling filmmaker. And would “The Spielberg of Hackney” have been so newsworthy to The Guardian? I suspect not.

If you’re interested in the potential of regional film and TV production, the Herefordshire Media Network will be hosting a panel discussion on this subject at the Borderlines Film Festival next month.

The Advantages of Regional Filmmaking