I feel like crap when I wake up, but by the time we start shooting I’m merely sniffly and a bit achey.
Last night I spotted on today’s call sheet that heavy rain was forecast and a day exterior was scheduled! After I pointed this out, the scene was bumped and so we’re shooting mostly in the nun cell and corridor today. After reviewing Javier’s edits with Ben, we decided that 650s on the ceiling simulating candlelight look best with a layer of tough-spun diffusion on, as per the chapel set, so this morning we diff the 650s in the corridor set too.
The nun cell has one small window and a gobo grill in the ceiling, so the lighting options are very limited. Though sometimes less is more. We do a night scene and, for the first time, I eliminate the 2.5K HMI punching in the window, going just with the 575W HMI coming in through the ceiling gobo (with opal diffusion and steel blue gel) and a kino in the window (with steel blue). We use bounce boards to bend the light onto the actors when these sources cannot reach them.
We bump up a candle in the room with a 300W tungsten fresnel. Ben fashions a black-wrap snood for it which makes its patch of light very controllable. Max fades it up and down in sync with the candle being lit and blown out.
Later, for a different scene, the 2.5K comes back into play. It works best when the beam misses our heroine. She’s just lit by the natural bounce and the diffusion caused by the impure ‘glass’ in the window. The shaft of light, combined with the textures of the set, give the image a beautiful painterly quality.
I regret that I cannot give a more convincing impression of nighttime in the cell. I would love there to be black outside the window, but any lamp powerful enough to put sufficient light into the set also makes the window itself turn white, as if there is a bright sky outside. If the window was modern, clean, fully transparent glass that would not happen, but this is a period film. I would also love to make the candlelight appear to be a much brighter source than the ‘moonlight’ coming in from the window. But there isn’t room. We can bump up the candlelight slightly in a mid or close-up, but in a wide there’s nowhere to hide anything.
One of the last shots of the day is a pick-up from a Tretower scene with an off-camera fire. The FX boys, Warwick and Aaron, bring in a fishtail – a small flame bar – along with a wind machine and smoke to replicate the exterior conditions indoors. 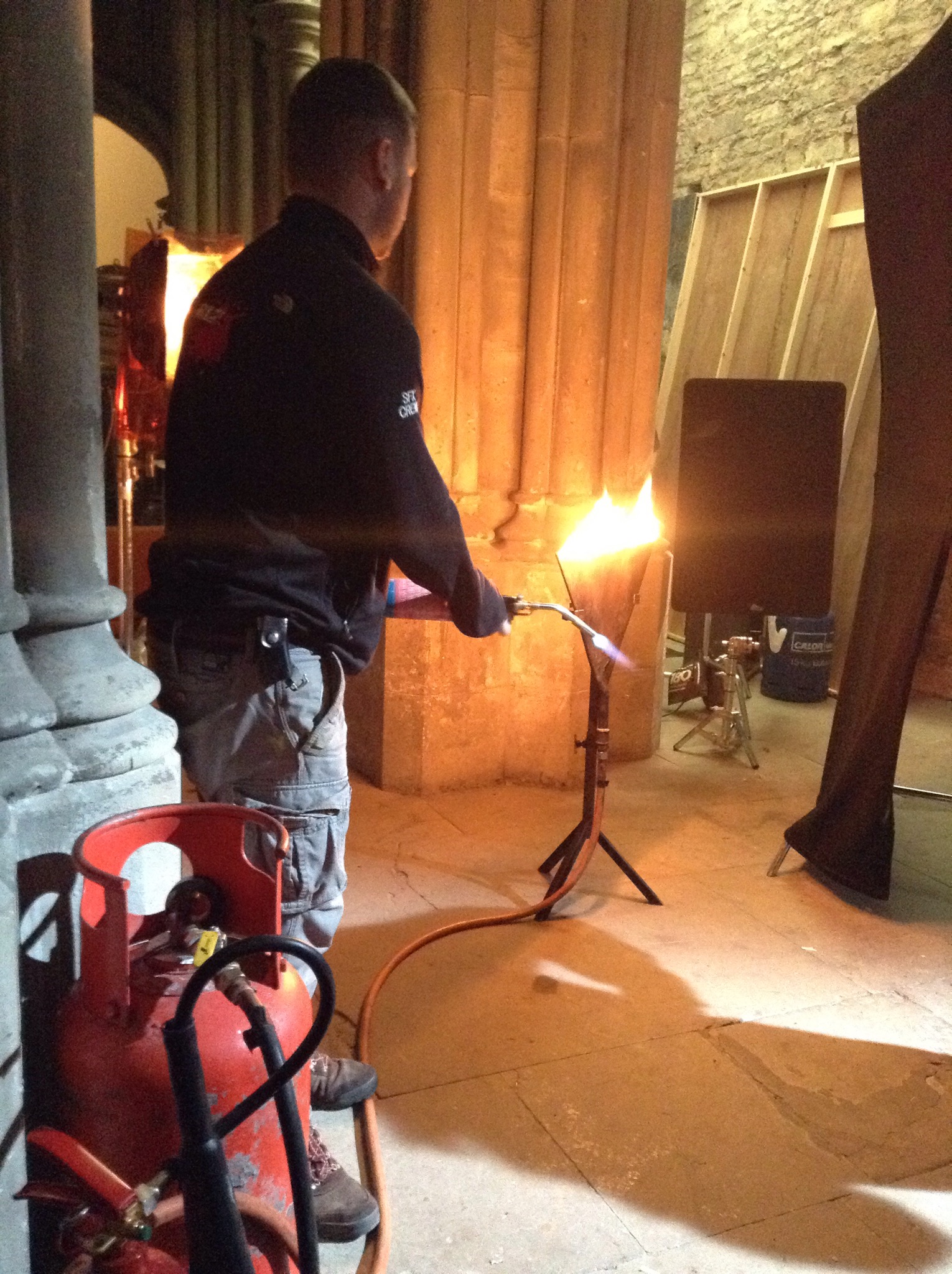