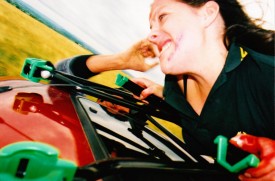 There are many ways to shoot a chase scene, but not all of them will give a sense of speed. Today I’m going to look at the chases in a couple of my old films and see what we can learn from them about enhancing the impression of speed.

First of all, here is the car chase from my silly 2002 action movie, The Beacon. (You may notice I’ve tried to increase the sense of speed through extremely fast editing, with only limited success.)

I think the least successful part of that chase, in terms of conveying speed, is the section between 0:20 and 0:45. Why? Because the cars are driving along open road with little except the occasional telegraph pole passing close to them. Parallax is incredibly important when shooting action – the concept that objects closer to the camera seem to move faster than those further away. So the hills and fields in the background seem to move quite slowly, even though the cars were going at a fair old lick. If there had been bushes or poles in the foreground, zipping past close to camera all the time, the side-on tracking shots would have been much more effective.

The shots where the camera was mounted to the outside of the car look better, because we are close to the surface of the road, which therefore appears to zip by very quickly. Similarly, when the cars enter the narrow, wooded lane at 0:50, there is a great sense of speed because the passing greenery is only a foot or two from the car.

From around 1:20, as the cars cross an open field again, I took a different approach. I shot the vehicles on a very long lens, handheld, panning with them. Because panning – especially on a long lens – is a two-dimensional movement, it completely eliminates parallax. Everything that passes in the background moves at the same speed, determined entirely by the speed of the pan, which is in turn determined by the speed of the person or vehicle you’re panning to follow.

I applied some of these lessons to the foot chase in Soul Searcher, beginning at 1:08:30. Note the use of long lens pans, and tracking through narrow aisles for maximum parallax.

Speed is all relative, so it’s important to cut every now and then to a shot where your camera isn’t moving, giving the maximum relative velocity to your chaser and chasee as they zip past. Actually that’s not the maximum relative velocity; in the Soul Searcher chase you may have noticed  the odd  shot where someone runs towards camera as the camera simultaneously moves towards them.

So, in summary, here are my tips to satisfy your need for speed:

Want to know more about how The Beacon’s car chase was shot? Read this retrospective blog post.

Need your car chase to end with a crash? Here’s how I staged the car crash in The Beacon.

Want more tips for shooting in a moving car? Here’s how I did it last summer on The Gong Fu Connection.