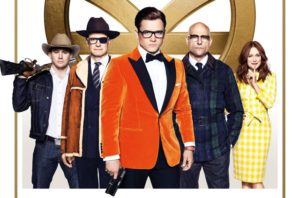 The first Kingsman film made me very angry – in fact I wrote a blog post explaining exactly why it was so misogynous. I was therefore planning to avoid the sequel like the plague, and instead a friend and I set off for the local Vue this afternoon with  a voucher for two free tickets and the intention of seeing A.A. Milne biopic Goodbye Christopher Robin. Unfortunately, on arriving we were told that a broken projector meant that the screening of Goodbye Christopher Robin was cancelled. Neither of us were very enthusiastic about anything else that was showing, but Kingsman: The Golden Circle was starting soonest, so we plumped for that.

Though silly, and providing little screen time to women, the movie was tolerable until it reached the middle with a sequence set at Glastonbury. The scene required our “hero” Eggsy to implant a tracking device on a woman called Clara. For reasons not explained, and extremely difficult to imagine, the tracking device must be implanted in her vagina. That’s tantamount to rape with a foreign object, isn’t it? Or some equally serious and horrifying crime.

At around this point I got up and walked out, shaking with anger and sick to my stomach. I felt dirty, like I had just stood by and watched a gang rape. With the exception of my friend, everyone else in the audience was laughing and (seemingly) enjoying it. It was not an experience I wanted to continue to participate in. I can’t imagine how it made female viewers feel.

I’m told that the next scene featured an uncomfortable sequence in which Eggsy gradually reaches into Clara’s knickers, followed by a CGI zoom into her vagina as the tracking device enters. It sounds like the camera kind of raped her. Ugh.

Now look, I’m not saying that movies shouldn’t have scenes of rape or sexual assault, or whatever strange and abhorrent crime Eggsy commits by placing a foreign object in an unwitting woman’s vagina. Kingsman is loathsome and unacceptable because of two things:

1. Eggsy is the “hero” of the film, the “good guy”, the one who is meant to be loved and idolised. If he was the villain, it would be clear to all viewers that his actions were wrong, but because he is the hero the film implies that his behaviour is not only acceptable, but “heroic” and “good”. Kingsman teaches its teenage audience that the objectification and violation of women is to be admired.

2. Clara is completely unaware of what is being done to her. At least in a rape scene the woman knows she is being violated and can try to fight back. Here the whole thing is played for comedy. Not only is Clara ignorant and completely powerless, but the audience is made complicit in her assault by being encouraged to laugh at her because she doesn’t know what’s going on. It’s like the whole thing is a sick game; indeed there is dialogue between Eggsy and his fellow agent Whiskey in which it is made clear that they are competing to assault Clara. She is humiliated and degraded in every possible way.

Director Matthew Vaughan responded to criticism of the first Kingsman’s misogyny by saying that it was a joke, pushing the sexist tropes of Bond films to the extreme. The backlash should have informed him that this was a bad idea. Instead of taking the hint, he went even further with the sequel. The only possible conclusion is that Vaughan and his fellow filmmakers genuinely hate women. It is simply staggering to think of the number of people involved in the movie who apparently thought this sequence was perfectly okay.

Come to think of it, who else do we know that likes being peed on and grabbing women by the vagina? Perhaps I shouldn’t be so surprised that, in a world whose most powerful man believes he can do what he wants with women’s bodies, movies will express the same ideology. It’s sickening and depressing.

“Kingsman: The Golden Circle” and the Glorification of Sexual Assault