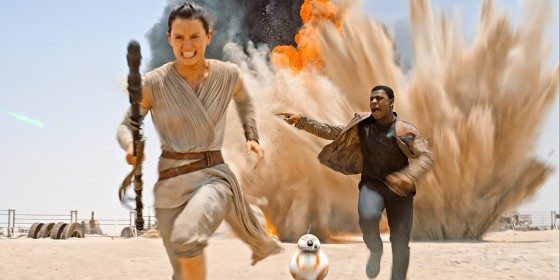 J.J. Abrams, though one of my favourite directors, has something of a chequered past when it comes to representing women on screen. Although noted for female leads in some of his projects (the TV shows Felicity, Alias and Fringe), he’s not averse to showing them in their underwear to grab ratings or boost ticket sales. The season four premier of Alias springs to mind – a scene with Jennifer Garner in lingerie was brought to the start of the episode as a flash-forward in a cynical effort to hook audiences – as does the gratuitous shot of Alice Eve in her underwear in Star Trek Into Darkness, which rightly caused an internet furore.

So I waited with mixed feelings to see where Star Wars Episode VII: The Force Awakens would fall on the misogyny/feminism spectrum. BEWARE: SPOILERS AHEAD.

The film presents two new central characters, vying for the position of protagonist: John Boyega’s Finn and Daisy Ridley’s Rey. For the first few reels, the script seems to be trying too hard to be feminist: Rey is constantly rebuffing Finn’s patronising attempts to protect her. This reeks suspiciously of the “post-sexism” portrayal of female characters, whereby they serve the same old plot function of damsel in distress, but are made “strong” by perfunctory attempts to assert their authority and complaints about how reckless and useless the men are – even though the patriarchal script still has those same men save the day.

This theory seems to be confirmed as Rey is knocked unconscious and carried off to the villain’s lair, leaving us to assume her plot function is indeed just to be rescued by Finn. Aboard the Death Star, or whatever they’re calling it, villain Kylo Ren creepily remarks that he can take whatever he wants from her. He proceeds to mind-rape her with the Force – a much darker interrogation than Vader’s implied use of the floating spiky ball thing on Leia in episode IV. But the film toys with our expectations as Rey turns this invasion back on Ren, and subsequently escapes her cell through her own agency.

Things get patriarchal again when a climactic light sabre battle sees Rey knocked unconscious as Finn fights the villain. But suddenly J.J. turns the tables. Rey recovers, Finn is knocked unconscious, and Rey triumphantly defeats the antagonist with a bad-ass combination of physical and mental prowess. At least, she defeats him as much as the antagonist can ever be defeated in the first part of a trilogy. Presumably in Episode IX she’ll send him spiralling fatally into the depths of a bottomless shaft, since the whole plot is just a re-run of the original films. 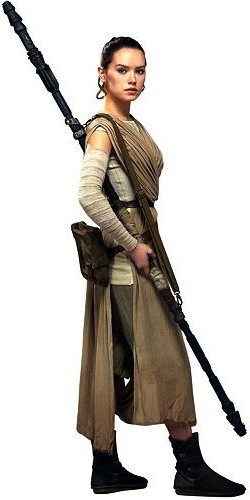 Despite its female protagonist, Episode VII’s feminism is far from perfect. In common with other female leads in contemporary cinema, Rey is surrounded by a sea of male characters, as if the filmmakers have to compensate the audience for the lack of one big leading penis with a plethora of supporting penises. The movie only passes the Bechdel Test by the skin of its teeth, as far as I can recall – Rey’s conversation with Maz Kanata being at least partly about Luke, and dialogue between Rey and Leia not occurring until the film’s closing minutes.

Frequently throughout the running time, Rey is referred to simply as “the girl”. This is a recurring and worrying theme in genre movies: “Give me the girl”, “Let the girl go and I’ll give you the MacGuffin”, etc, etc. Apparently women are so insignificant and interchangeable that they need no names. Let’s hope that J.J. and co-writers Lawrence Kasdan and Michael Arndt were deliberately pastiching this as part of their subversion of gender roles.

Either way, Star Wars Episode VII: The Force Awakens is refreshingly feminist and presents a great female role model. Hopefully there will be just as many little girls wanting light sabre toys as little boys (though I find the lack of Rey action figures disturbing). I doubt we’ll ever see a female Bond  – sleeping with hunky men then not caring when they get killed – but we’re moving closer to a female Doctor Who – two major Timelord characters having recently regenerated into women – and having a woman at the centre of the Star Wars universe is a definite step in the right direction for the world media’s representation of the gender. 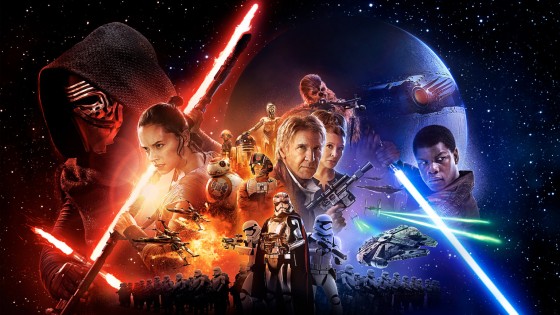