In part 1 I described how we arrived at a lighting package and monitoring solution for the Japanese leg of this sci-fi feature shoot.

The first scene to go before the camera was the night interior, set in a hospital kitchen. The location was blacked out by the Japanese crew with incredible efficiency, so we could shoot it in the afternoon. Unable to light through the windows, I hid LitePanels in alcoves and around corners. They were all set to 5,600K and most were gelled with half CTB to appear very cool when shot with a white balance of 4,500K. The idea was to give the impression of streetlights – many of which are cool blue in Himeji – spilling into the dark, abandoned kitchen.

But Japan is a colourful place, and at night all hues of lighting are seen from signs and shopfronts as well as streetlamps. So, behind the frosted glass door of a locker room at the back of the master shot, I set up the HMI, gelled with Light Straw to suggest an older sodium vapour streetlight.

For a third layer of colour, I gelled one of the LitePanels red. 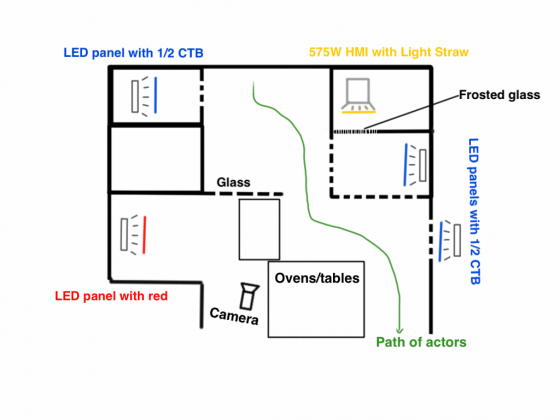 As the action progressed around the room, shot by shot, I moved the panels to new areas when the old areas ceased to be in frame, always taking care that the light was hitting the actors from the sides or from behind, never from the direction of the camera. (This would have made for flat lighting, a massive no-no in cinematography.) At one point I needed one more lamp than we had, and Keisuke saved the day with a small but very bright LED panel of his own.

In part 3 I’ll be breaking down the night exterior scenes.