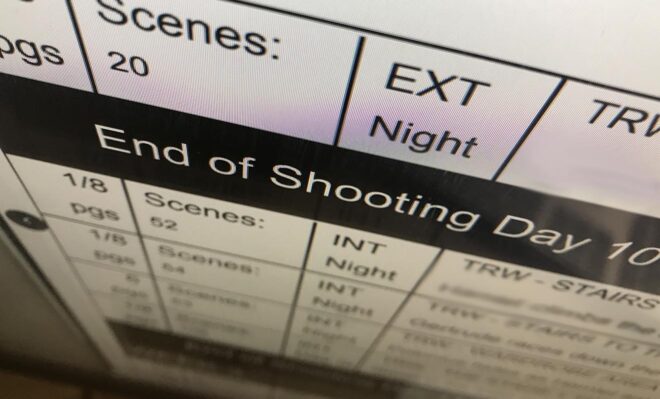 By the time you read this I will have entered the Covid bubble for the still-as-yet-unannounced Shakespearian film, the beginning of two weeks of full time prep before cameras finally roll.

The week just gone has been something of a calm before the storm. It started with two important Zoom meetings: one about practicals, the other about the schedule.

The first meeting involved going through all the locations with the production designer explaining what practical lamps he planned to put in each, and me sometimes asking for additional ones. Practicals are going to be a big part of our lighting, and this sort of collaboration with the art department can make a real difference between a smoothly-running shoot and a world of pain wherever you’re trying to hide film lights because you don’t have enough practical sources.

The second meeting, coming shortly after I saw the shooting schedule for the first time, was an in-depth discussion of it with the director, producer, line producer and 1st AD. Most of my concerns – other than some days which felt uncomfortably heavy, and even one or two that seemed wastefully light – were around times of day and equipment. For example, one daylight interior scene was scheduled for the end of day, when we might be losing the light. (The next day I went through it all again by myself and made sure that any night scenes scheduled for daytime could be reasonably done with blacked-out windows.)

We also talked a lot about how things could be rejigged to get as much value as possible out of the two days that we have the crane. It’s expensive, and no-one wants it sitting around while we shoot little dialogue scenes in tiny rooms. Nor do I want one or two scenes in the film to have lots of crane shots and the rest to have none; a sprinkling of them throughout the film would be preferable, though it would mean lots of costume and make-up changes.

Another draft of the script was issued , with pretty minor changes, though one extra room has been introduced, so that will need a proper recce next time I’m there. Reading through a new draft and updating my notes takes the best part of a day, and though it can sometimes feel like a chore, every reading helps me understand the story and characters better.

I did a little more shot-listing later in the week, but it will be much better and easier to do this at the rehearsals over the next fortnight, when I can see how the actors are approaching their characters and how they’re going to use the spaces. I can even take Artemis photos if it doesn’t interrupt their process too much. Roll on rehearsals!