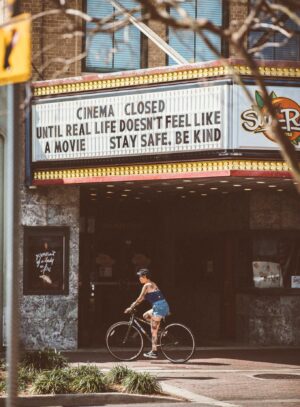 I know that as a professional director of photography I should want cinemas to recover and flourish. After all, even if many of the productions I work on don’t get a theatrical release, my livelihood must still be in some indirect way tied to the methods of exhibition, of which cinema is a foundational pillar. But I think we’ve reached the point where the film industry could survive the death of fleapits, and I’m starting to think that wouldn’t be such a bad thing.

Disclaimer: I’m writing this from a place of anger. Last Friday, the day that the cinemas of Cambridge reopened, I went along to the Light for a screening of Jurassic Park. The experience – which I shall detail fully in a future post – reminded me why going to the cinema can often be frustrating or disappointing. Since lockdown we’ve added the risk of deadly infection to the downsides, and before long we’ll have to add huge price hikes, the inevitable consequence of all those empty seats between households. (Controversially, I think that current ticket prices are reasonable.)

Setting Covid-19 to one side for the moment, here are ten long-standing reasons why cinemas deserve to be put out of their misery.

1. No real film any more

My faith in cinema was seriously shaken in the early 2010s when 35mm projection was binned in favour of digital. Some may prefer the crisp quality of electronic images, but for me the magic was in the weave, the dirt, the cigarette burns. The more like real life it looks, the less appeal it holds.

I’m not sure what’s worse, the adverts themselves, or the people who aim to arrive after the adverts and overshoot, spoiling the first few minutes of the movie by walking in front of the screen as they come in late.

Yes, I’m old enough to remember ushers in cinemas, just as I’m old enough to remember when supermarket shelf-stackers waited until the shop was closed before infesting the aisles. (Perhaps the unwanted stackers could be seconded to the needy cinema auditoria?) It’s not that I need a waistcoated teenager with a torch to show me to my seat, but I do need them there to discourage the range of antisocial behaviours in the next three points.

I understand that the economics make it unavoidable for cinemas to supplement their income by selling overpriced snacks. But do they have to sell such noisy ones? Is it beyond the wit of humanity to develop quieter packaging? Or for the gluttons to chomp and rustle a little less energetically, especially during the softer scenes?

One of the Harry Potter films was ruined by a child behind me constantly asking his mum what was happening… and his mum answering in great detail every time. Serves me right for going to a kids’ film, perhaps, but you never know what kind of movie might be spoiled by unwanted additional dialogue. I recall a very unpopular individual who answered his phone during The Last Jedi. And I’m sure we’ve all experienced that most maddening of all cinema phenomena: the people who inexplicably attend purely to hold conversations with each other, often conversations that aren’t even related to the film.

(5a. People snoring – a signficant drawback of Vue’s recliner seats.)

6. People looking at their phones

“The light from your phone can be distracting too,” say the announcements, and they’re not wrong. Basically, the biggest problem with cinemas is people.

Why is cinema air con always turned up so high? No matter how hot it is outside, you always have to take a jacket to keep off the artifical chill in the auditorium.

Home TV screens have been getting bigger for years, so why are cinema screens going the opposite way? Shouldn’t cinemas be trying to give their customers something they can’t experience at home? There’s nothing more disappointing than shelling out for a ticket and walking into the auditorium to see a screen the size of a postage stamp.

The purpose of going to the cinema is to see a movie projected at the highest possible technical quality by competent professionals, but the reality is often far from that. Stretched, cropped, faint or blurry images – I’ve witnessed the whole gamut of crimes against cinematography. The projectionists seem poorly trained, unfairly lumbered with multiple screens, and locked out of making crucial adjustments to the sound and picture. And because there are no ushers, it’s up to you to miss a couple of minutes of the movie by stepping outside to find someone to complain to.

This is the killer. This is what will ultimately bring cinemas down. TV used to be film’s poorer cousin, but these days long-form streaming shows are better written, better photographed and infinitely more engaging than most of what traditional filmmakers seem able to create. Maybe it’s just that I’m middle-aged now, and movies are still being made exclusively for 16-25-year-olds, but it’s rare for a film to excite me the way a series can.

Having said all of that, Christopher Nolan’s Tenet is out on Wednesday. Now that’s something I am looking forward to, if I can just find somewhere showing it on 70mm….

10 Reasons Why Cinemas Don’t Deserve to Survive the Pandemic