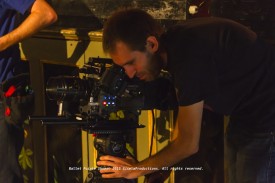 Any director worth their salt will be skilled in telling a story with the camera. But, quite understandably, they’re not familiar with the key concepts of cinematography – particularly the lighting side of cinematography – which a DP employs every day to create images that have impact, mood and production value. For the most part, directors don’t need to know these things – after all, that’s what the DP’s there for – but understanding a few of the basic concepts can help set up your film for visual excellence before the DP even gets involved.

It is logical to assume that light coming from behind the camera will give the best illumination to a scene. And on a purely cold, scientific level, it’s true. But on an aesthetic level, it couldn’t be more wrong. Quite apart from the practical issues of boom shadows and actors squinting in the sun, frontlight gives a flat, depthless image similar to a photo taken with flash.

Similarly, anyone who has taken photos with a camera in automatic mode will have been told – or quickly learnt – that shooting towards the sun, or when indoors, towards a window, is a bad idea, resulting in silhouettes and/or blown-out skies. So directors are often surprised when towards the sun (or a window) is EXACTLY the direction I want to shoot in, because it supplies beautiful backlight and allows me to fill in the shadow side – the side towards camera – as I see fit. No, it’s not going to be a silhouette (unless that’s what we’re going for) because I have a lamps and I have manual control of my iris.

2. Dark scenes do not require a camera with good low light sensitivity.

It depends what you mean by dark. A scene that is dark as a creative decision won’t actually be dark in reality because it will still be lit, perhaps highly lit, to create a moody, contrasty look. Therefore the camera’s sensitivity is not much of an issue.

A scene that is dark because you don’t have the budget to light it properly – yes, that’s going to need a sensitive camera if you’re going to see anything but noise.

3. You can’t fix everything in the grade.

It is truly amazing what can be done with today’s colour correction software, but there are two things it can’t do: it can’t save an image that was seriously underlit or underexposed, and it can’t change the angle or quality of light. Colour and intensity, yes. Angle and quality (soft/hard), no. And since these are the main things a DP determines, grading can never replace a good cinematographer. If it doesn’t look good on the monitor on the day, it will probably never look good.

4. We can’t light without seeing the blocking.

I can’t count the number of times I’ve turned up on set and asked to see the blocking, and been told no because the actors actors are in make-up, “but they’re going to stand kind of here.” In most circumstances, the first scene of the day should be blocked BEFORE the actors go to make-up. That way the DP can be lighting while the cast is getting made up, which is much more time efficient. Otherwise the DP tinkers about trying to light the space and looking at their watch, then when the talent comes out everyone is kept waiting while the DP changes all the lighting. Because inevitably the actors will want to do something different than what the director had in mind, or the director forgot to mention that one of the actors has to be seen coming through the door at the start, etc, etc. Blocking can also throw up problems with the scene which can be solved by various other departments while make-up is going on.

5. A good camera and a good DP are not substitutes for good design.

Light and lensing can only do so much. If what’s put in front of the camera doesn’t look good to start with, there’s very little I can do about it. Get an art director. Please, please, please, get an art director. They will do much more for the look of your film than I can. I don’t care if it’s a futuristic sci-fi movie or a gritty drama shot in a student flat, you need an experienced person with an artistic eye adding character to the sets and locations, developing a palette and composing everything beautifully for the camera.

5 Things Directors Should Know About Cinematography