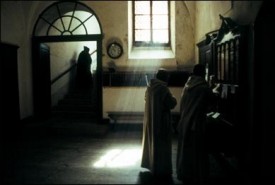 I just got hired last-minute to photograph a 17th Century supernatural thriller feature. At this stage I don’t know how much time I’ll have and how much I’ll be allowed to say about it, but I thought I would try a daily blog. It might make a nice change to “bring you along” on a shoot. So let’s dive right in.

November 11th
I’m one of several DPs to meet with Paul, the director, about the project. Since first being contacted about it yesterday (sound recordist David kindly recommended me) I’ve only had time to read the script, watch the trailers for Paul’s last two films and do a quick google for some reference images. Several of those images are from The Devil’s Backbone, a film that sprung to mind as I read the script for Heretiks. Another image is the one in this post. I love the idea of the God rays coming in but not hitting the characters; they’re trying to be divine but falling short. I suggest to Paul that this could be a visual theme, and he seems enthusiastic. The meeting goes very well.
Paul’s keen on using a lot of Steadicam, so even though I haven’t got the gig yet I call Rupert (my 1st AC and Steadicam op on Exile Incessant) and sound him out.

November 12th
Mid-morning I get a call from the producer, offering me the job. I immediately confirm Rupert and spend the next few hours trying to fill out the rest of the camera, grip and lighting crew. After a brief discussion with Paul about shooting format, we quickly settle on the Alexa. I call the rental house, 180 Degrees in Bristol, to introduce myself, confirm the camera package and Cooke S4 lenses, and add an extra item or two.
Around 5pm I set off for South Wales, to be ready for tech scouts the next day. Rammed into a rush-hour train from Paddington, I go through a hardcopy of the script with a biro and two highlighter pens: blue for lighting, pink for camera. I also compile a character cheat sheet, because the script has a lot of characters and I know I’ll get them mixed up otherwise. It will also help to track their journeys through the story.

November 13th
I wake up to a wet, windy and bitterly cold Welsh morning. I’m going to need to buy thermal underwear before the shoot starts. A dozen of us pile into a minibus and drive to the first of our two main locations. As Paul talks everyone through the scenes, I struggle to keep up, being less familiar with the script than the others, some of whom have already been on the project for weeks. We don’t have a gaffer for the shoot yet, but a friend of the production manager’s has come along to draw up a lighting list. I’m also liasing with the effects supervisor and the production designer as we consider the requirements of each room. The first location is home to a protected bat colony, so only a specific type of bat-friendly smoke can be used.
After a very welcome pub dinner, we proceed to the second location. By this time it’s much clearer what Paul and Justin (the production designer) are aiming for. I can’t wait to see Justin’s plans come to life. When the recce is finished, we go through the schedule to determine which days will require naked flames – requiring an additional effects person on set. Then I head home, finishing my script mark-up on the way. I have the weekend off, then it’s back to Wales on Monday to start prep in earnest.