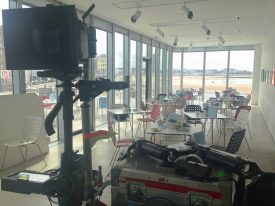 One of our biggest days, shooting several key scenes from the first act of the movie. We’re in the Turner Contemporary in Margate, and getting this location is a big coup for the production. On the flip side, the amount of material we have to get through in our nine hour day is only achievable if lighting is kept to an absolute minimum. I know from the photos that Leon has shown me that there is plenty of natural light from the floor-to-ceiling windows and bright white walls. I also know that with eight scenes on the day’s schedule, there isn’t time to rig the kind of extensive negative fill we used at the roadside cafe last week.

We start in the Turner’s cafe, where angles towards the windows look great with the beach and seafront in the background and the daylight wrapping softly from behind and one side. In the opposite direction the light is extremely flat, but there is no time to do anything but hand-bash a little negative fill, grin and bear it. 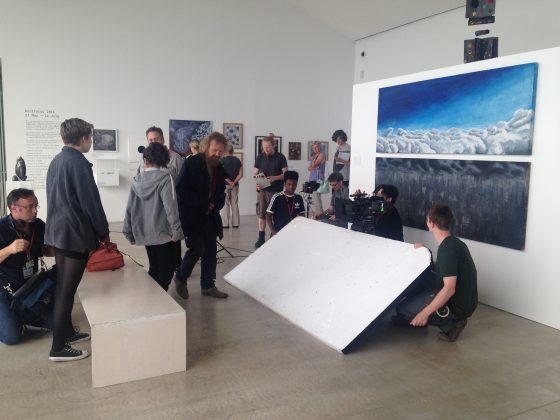 Upstairs in the gallery, the sea-view windows are so big and there is so much bounce off the walls that there is only about a single stop’s difference between looking towards the window and looking away from it. Nonetheless, we bring in poly and Celotex for the seaward shots to add a little shape and put nice reflections in the talent’s eyes.

Responding to the formality of the gallery setting, there is an unspoken agreement between Leon and I to shoot on sticks and compose centrally or symmetrically. I end the day feeling that we have captured some of the film’s most iconic images. 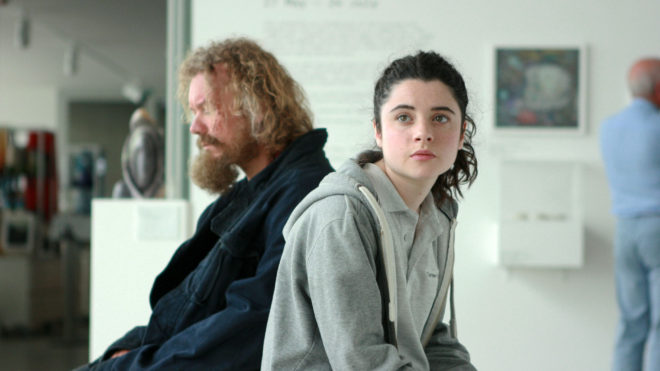 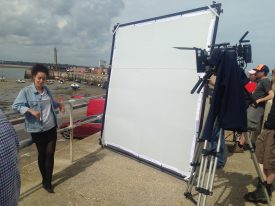 Back in Margate for seafront exteriors. The weather is lovely to start with, but gradually goes down hill as the day progresses. For the first scene we have light cloud, and we use the 8×8 full grid cloth as a bounce to fill in the shadows. For close-ups we add silver from Celotex or a Lasolite to give the talent extra radiance and a glint in their eyes. (See my post on Health Bounce for more on this.)

The influence of yesterday’s gallery scenes is still being felt on the compositions. In wide shots I try to use the horizon to divide the frame into two halves, like the diptych the characters were looking at in the Turner: one above the clouds (or more accurately OF the clouds), and one below. I use a graduated ND filter on most of the day’s wide shots. Even though the Alexa’s dynamic range means that grads are rarely necessary to retain the detail in skies, and they can be added in post, I prefer to get the look in camera, especially on a micro-budget project where time in the grading suite may be very precious. 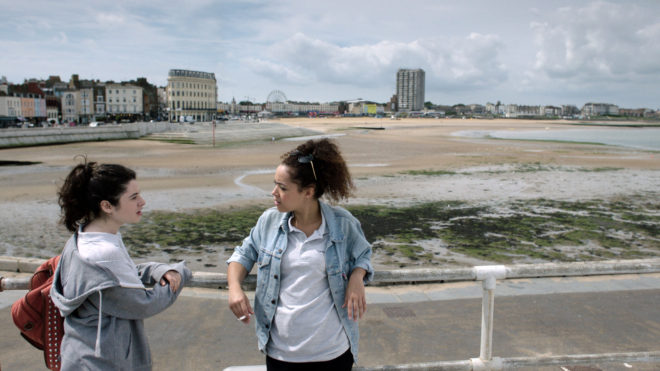 The day ends with a dusk shot of Oz shuffling along the seafront, which we shoot in the window between the streetlights coming on and the daylight dropping off completely. I set the white balance to 3200K to emphasise the evening look. The colour and positions of the streetlights aren’t great, but there is a lot of production value in the backdrop of Margate, bathed in cool ambience and sprinkled with points of light. 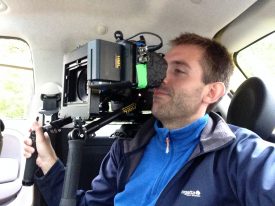 Our first scene is on a layby overlooking an estuary. Again the weather starts off nice but deteriorates as the day goes on. By the time we get back to Leon’s for the next scene, the rain is getting noticeable enough that continuity with adjacent scenes is an issue. We decide to wrap for the day.

The camera team uses the time to re-build the Alexa Mini as small as possible and test different lenses inside the picture car for upcoming driving scenes. Our main angles will be from the back seat, looking diagonally forwards for three-quarter singles and straight ahead for a central shot over both driver and passenger’s shoulders to the windscreen. We find that the 24 and 32 work well for the former, and the 20 for the latter. We have a 14, because I knew space would be tight in the car, but it just looks like a Top Gear Go Pro shot. 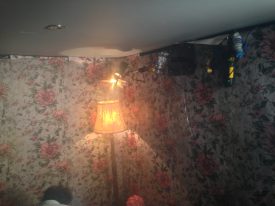 We’re in another tiny set in Leon’s living room. Production designer Zoë Seiffert has dressed it as a beautiful/hideous den of clashing patterns and colours, and practical lamps. First up is a day scene, newly added to the script, so as with the Travel Inn I fire in the 2.5K HMI, this time with the curtains open. That might seem like a ridiculous amount of light for a room only about 10ft square, but only a powerful source like that creates all the bounce and ambience that sun would. I make sure the direct beam only really hits the floor. For some shots I put a white sheet over the carpet to maximise the bounce off the floor.

For the night scenes Colin puts all the practicals on dimmers and I place one of Leon’s ETC Profiles outside the window with Urban Sodium gel. Although the curtains will be closed, they are thin enough to be backlit by this ‘streetlight’. The bulb is even visible through the curtains sometimes, but it totally passes as a streetlight. That’s the only source of light when the characters first enter in silhouette, before turning up the practicals. 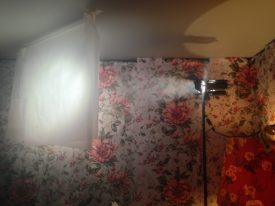 To beef up the practicals, we rig a couple of Dedos to the top of the set and direct one through sheets of Opal hung from the ceiling, as a key, and use the other as backlight with half CTO on it. We tweak them around shot by shot to follow the blocking. For a scene with more character conflict, I lose the backlight and go hard with the key.

Later we move to another location – conveniently the cottage neighbouring the one where most of us are staying – for a little doorstep night scene. Again I rake the 2.5K along the front of the building, through the full silent grid cloth. In the singles we beef up the existing exterior sconce with three tungsten globes wrapped in Opal. I would rather have used an 800 bounced off poly, for a softer texture, but our package is pretty lacking in tungsten units.

After wrapping we throw a surprise birthday party for Zoë. Colin lights the party with a remote-controlled colour-changing LED fixture and smoke. 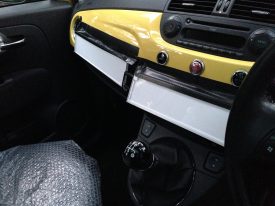 We have two hours in a charity shop to set up (including blacking out windows), shoot two scenes, and tear down. Leon decides to shoot them both using only torchlight, and choreographs the cast to light each other throughout the scenes. We hide silver Lasolites and other bounces around the set to reflect the torchlight when it doesn’t make sense for the actors to point their torches where they’re needed. We smoke up the shop heavily to show up the beams. 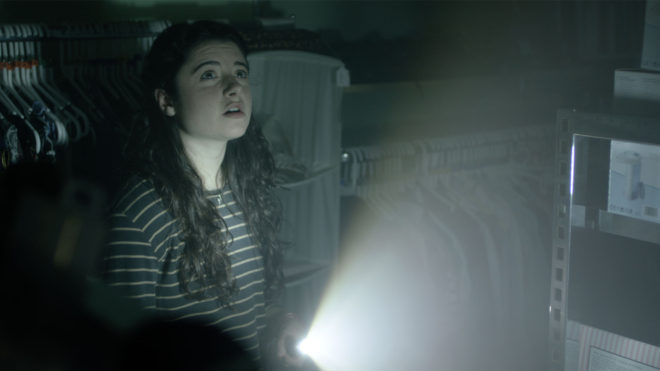 To anchor the shots, so the pools of torchlight aren’t floating around in a black nothingness, I set two lamps in the background. One, a Divalite gelled with Urban Sodium, spills out of a changing room, and the other, a 1×1 LED panel gelled heavily blue to suggest a computer screen, glows out from behind the counter. As well as adding colour, and colour contrast, to the scene, the pools of light from these two lamps serve to silhouette the characters so you get a sense of where they are when the torch beams aren’t on them. 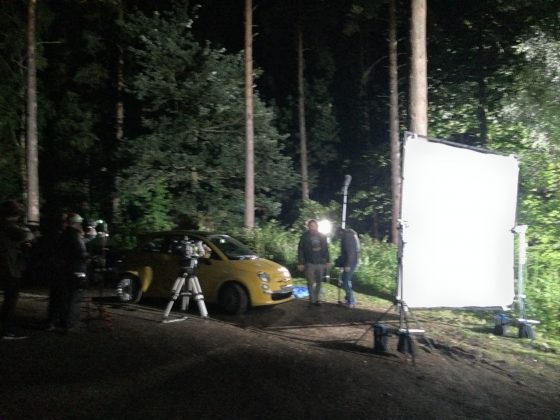 We move to a forest car park for the film’s only major night exterior. With our HMI package consisting of only a 2.5K and 1.2K, and no tungsten bigger than a Dedo, this was always going to be challenging. We place the 2.5K in the deep background, purely to light up the smoke and foliage behind the action. The action itself is lit by the 1.2K and two 1×1 LED panels, plus smaller panels taped to the dashboards of the vehicles in the scene.

To get it all done with the time and resources we have, a compromise must be made somewhere with the lighting. I decide that this compromise will be motivation of sources. Other than dashboard lights, there should really only be one source in this scene: the moon. If I had time, I would move the biggest source around to backlight every shot and then bounce it back as sidelight. Instead we leave the HMIs mostly where they are, and fly the 1×1 panels around to backlight or sidelight as needed. It makes no sense whatsoever, but it looks good.