Like many of us, I’ve watched a lot of streaming shows this year. One of the best was Chernobyl, the HBO/Sky Atlantic mini-series about the nuclear power plant disaster of 1986, which I cheekily binged during a free trial of Now TV.

I use the phrase “took home” figuratively, since no-one had left home in the first place. The craft awards ceremony was a surreal, socially-distanced affair, full of self-filmed, green-screened celebrities. Comedian Rachel Parris impersonated writer/actor Jessica Knappett, and the two mock-argued to present the award for Photography & Lighting: Fiction. Chernobyl’s DP Jakob Ihre, FSF gave his acceptance speech in black tie, despite being filmed on a phone in his living room. In it he thanked his second unit DP Jani-Petteri Passi as well as creator/writer Craig Mazin, one of the few principal players not to receive an award.

Mazin crafted a tense and utterly engrossing story across five hour-long instalments, a story all the more horrifying for its reality. Beginning with the suicide of Harris’ Valery Legasov on the second anniversary of the disaster, the series shifts back to 1986 and straight into the explosion of the No. 4 reactor at the Chernobyl Nuclear Power Plant in the Soviet Ukraine. Legasov, along with Brosi Shcherbina (Stellan Skarsgård) and the fictional, composite character Ulana Khomyuk (Emily Watson) struggle to contain the meltdown while simultaneously investigating its cause. Legions of men are sacrificed to the radiation, wading through coolant water in dark, labyrinthine tunnels to shut off valves, running across what remains of the plant’s rooftop to collect chunks of lethal graphite, and mining in sweltering temperatures beneath the core to install heat exchangers that will prevent another catastrophic explosion.

For Swedish-born NFTS (National Film and Television School) graduate Jakob Ihre, Chernobyl was a first foray into TV. His initial concept for the show’s cinematography was to reflect the machinery of the Soviet Union. He envisaged a heavy camera package representing the apparatus of the state, comprised of an Alexa Studio, with its mechanical shutter, plus anamorphic lenses. “After another two or three months of preproduction,” he told the Arri Channel, “we realised maybe that’s the wrong way to go, and we should actually focus on the characters, on the human beings, the real people who this series is about.”

Sensitivity and respect for the people and their terrible circumstances ultimately became the touchstone for both Ihre and his director. The pair conducted a blind test of ten different lens sets, and both independently selected Cooke Panchros. “We did a U-turn and of course we went for spherical lenses, which in some way are less obtrusive and more subtle,” said Ihre. For the same reason, he chose the Alexa Mini over its big brother. A smaller camera package like this is often selected when filmmakers wish to distract and overwhelm their cast as little as possible, and is believed by many to result in more authentic performances.

When it came to lighting, “We were inspired by the old Soviet murals, where you see the atom, which is often symbolised as a sun with its rays, and you see the workers standing next to that and working hand in hand with the so-called ‘friendly’ atom.” Accordingly, Ihre used light to represent gamma radiation, with characters growing brighter and over-exposed as they approach more dangerous areas.

Ihre thought of the disaster as damaging the fabric of the world, distorting reality. He strove to visualise this through dynamic lighting, with units on dimmers or fitted with remote-controlled shutters. He also allowed the level of atmos (smoke) in a scene to vary – normally a big no-no for continuity. The result is a series in which nothing feels safe or stable.

The DP shot through windows and glass partitions wherever possible, to further suggest a distorted world. Working with Hull and Levinson-Gendler, he tested numerous transparent plastics to find the right one for the curtains in the hospital scenes. In our current reality, filled with perspex partitions (and awards ceremonies shot on phones), such imagery of isolation is eerily prescient.

The subject of an invisible, society-changing killer may have become accidentally topical, but the series’ main theme was more deliberately so. “What is the cost of lies?” asks Legasov. “It’s not that we’ll mistake them for the truth. The real danger is that if we hear enough lies, then we no longer recognise the truth at all.” In our post-truth world, the disinformation, denial and delayed responses surrounding the Chernobyl disaster are uncomfortably familiar.

The Cinematography of “Chernobyl”

Looking at this year’s Bafta Best Picture nominations, I realised there was only one that I hadn’t seen, so I headed off to the cinema to complete the set. For what they’re worth, here are my thoughts on the five nominated films. 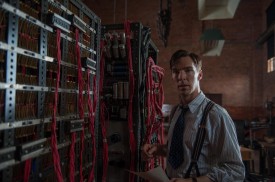 THE IMITATION GAME is the story of Alan Turing, the man who helped shorten World War II by breaking the Nazis’ Enigma code, but was driven to suicide after being convicted of indecency for homosexual acts. The film takes numerous liberties with the truth – creating conflict where none existed, and ignoring other people who contributed to the code-breaking success – but such liberties are often necessary in adapting reality to the needs of cinema.

As played by the ever-brilliant Benedict Cumberbatch, Turing is arrogant and socially inept to the extreme, like a wartime Sheldon Cooper. Keira Knightley turns in a solid performance as Turing’s friend and confidant, as do Mark Strong and the rest of the supporting cast. With great design and beautiful 35mm cinematography, the film is a treat for the eyes.

Of all the nominated films, this is the one that got me most, emotionally. I rooted for Turing and his much-doubted Bombe machine to work, and when it does the film really soars. Then begins the plunge to the opposite end of the emotional scale. It is truly tragic what this country did to Turing, and I felt the shame of that keenly as the film drew to a close. 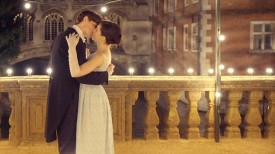 THE THEORY OF EVERYTHING is similar in many ways, the story of another brilliant Englishman whose life is marred by tragedy. Eddie Redmayne is Stephen Hawking, the theoretical physicist who defied time in more ways than one. Diagnosed with motor neurone disease in the sixties and given two years to live, Hawking went on to model the origins of the universe.

The film is based on the autobiography of Hawking’s wife Jane, played by the very talented Felicity Jones. But inevitably it’s Redmayne who provides the tour de force performance, reportedly exhausting himself on every take as he maintained Hawking’s contorted postures.

Director James Marsh peppers the film with galactic spirals, from the simple joy of the Hawking kids playing around a circular fountain, to the profound mundanity of UHT milk swirling in a British Rail coffee. Like The Imitation Game, The Theory of Everything looks great, though its digital crispness can’t quite match the beauty of the former film’s 35mm images.

While both of these films are extremely well made and engaging, neither demonstrates a particularly unique cinematic voice, which would seem to be necessary to justify the winning of a Best Picture Bafta. 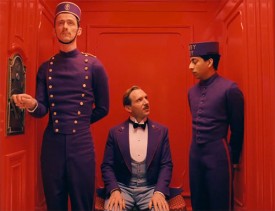 Book-ended by scenes in the present day (shot in 1.85:1), the film quickly moves to 1968, which depicts the titular hotel in decay, the 2.39:1 frame literally revealing the fraying edges as they bow under the distortion of Anderson’s super-wide lenses. Conversely, the main narrative, set during the hotel’s heyday of 1932, is seen only through the blinkered eye of a 4:3 frame, all flawless straight lines, as slick as Gustave.

As in all of Anderson’s best work, every situation comes across as hilariously ridiculous, and every character is memorable. Fiennes is delightfully arrogant and self-involved, Revolori is charmingly earnest, and the supporting cast are clearly having the time of their lives. The ski/sledge chase is a particular highlight, the stop motion wide shots looking joyously like something out of a seventies kids’ TV show. (I had the pleasure of working with lead animator Andy Biddle many years ago on Soul Searcher.)

But while The Grand Budapest Hotel is the quirkiest of the nominations, this quirkiness has been well practiced by Anderson throughout his career. He’s not pushing himself, and so this film does not, to my mind, merit a Best Picture win.

The last two nominations, however, both push the artform of cinema by challenging the conventions of how films are made.

BOYHOOD, directed by Richard Linklater, was filmed in annual stages over twelve years, in order to capture the genuine ageing of its young protagonist (Ellar Coltrane). I don’t know about you, but I’m often distracted from the storyline of a movie by unconvincing ageing make-up or the substitution of what is clearly a different actor to play a character at a different age, so it was great to see a movie that finally showed real ageing.

The film stays close to reality in other aspects, too. None of the cast look like (or are, for the most part) movie stars. It’s unusual to see a spotty face or an overweight leading lady in a Hollywood movie, but Linklater does not shy away from these things. The performances are all naturalistic, even when the kids are very young; Samantha’s teasing of her younger brother will be recognisable to anyone who’s not an only child, and provides an early highlight in the film. The look of Boyhood is equally raw; its 35mm images are dirty, and you can feel the stock being pushed in the night scenes.

Unfortunately, Linklater also chose to be true to life in the narrative: there isn’t one. A burst of story a third of the way through sees the family suffer as mum (Patricia Arquette) marries a violent alcoholic, but otherwise it is, like life, a series of unconnected events. Characters show up and disappear without explanation, like the friends we lose touch with. Towards the end, Mom monologues about the futility of life, and that’s the theme I took away from this unique, accomplished but unsatisfying movie. 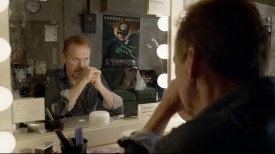 Finally we have BIRDMAN, in which Michael Keaton gets near the knuckle as Riggan Thomas, a has-been actor most famous for playing a Batman-esque superhero. Riggan is now trying to reinvent himself as a serious thesp by writing, directing and starring in a Broadway play.

Apart from a brief montage near the end, Birdman echoes its theatrical setting by appearing to consist of one continuous shot. Although this isn’t unprecedented in movies, nowhere has it been done as effectively. The technical and logistical challenges of shooting a movie like this – with grips dancing around behind the camera and technicians dimming lamps up and down to maintain shape in the lighting – God knows how the boom op got in there – would overwhelm most directors, but not Alejandro G. Iñárritu.

DP Emmanuel Lubezki’s roving camera puts you right inside the action. His wide lenses, pushing incredibly close to the actors’ faces, provide a level of intimacy unparalleled in my experience of cinema. That the performances not only stand up to this minute scrutiny, but positively shine, and that the pace never flags despite the impossibility of trimming scenes in post, is evidence of a tremendous talent and skill from director and cast alike. Both Keaton and Emma Stone, as his daughter, turn in career-high performances, extending their range beyond what we have previously seen from them.

But most importantly, Birdman tells a great story with strong and interesting characters. It’s essentially a portrait of a man’s mental breakdown, and it uses the simplest techniques – arresting performances, honestly photographed – and the most complex ones – elaborate hallucination VFX within a single-shot framework – to paint this portrait.

So, because it tells a strong story, and because it does that through the highly effective use of a challenging and near-unique production methodology, BIRDMAN would be my choice to win this year’s Bafta for Best Picture. 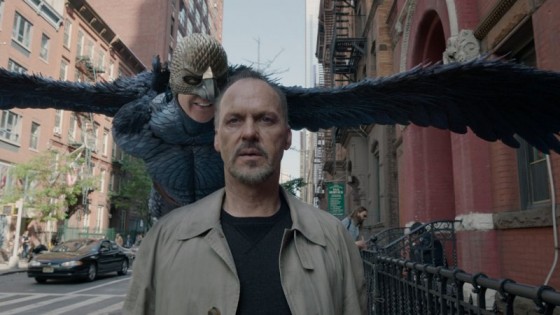 My Two Cents on the Bafta Best Picture Nominations