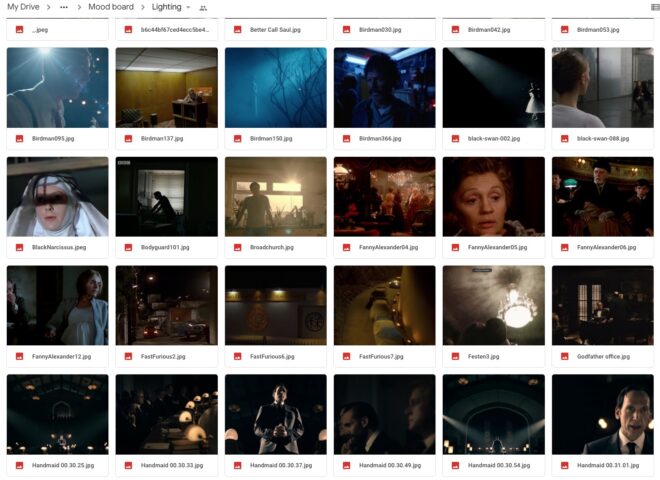 On Monday I went back to the location with the gaffer, someone I’ve worked with several times before, and looked at all the spaces we will be using. It is too early to start any lighting plans, but we talked in general terms about what sort of instruments we might want to use and roughly where. The gaffer had already seen my lighting mood board (above) and we had discussed the overall look on the journey to location, so we were already on the same page about what we are trying to achieve. He had some technical conversations with staff at the location about the existing lighting and power sources, and we finished the day by checking out one of the film’s few exteriors as it was getting dark, in order to see what existing sources there are for the night scene we will be shooting there.

I spent a significant chunk of Wednesday on a Zoom call with the production designer, and a couple of other crew, going through each of the spaces again and finding out what changes the art department are planning to make to them. It was great to see the designer’s reference images and to show him some new ones of my own so that we can bounce off each others’ ideas and keep the film on a coherent track. This is especially important as we intend to rely heavily on practical lights for many of the rooms. The location has some already in place, but we will be adding lots more.

The designer mentioned The Shining as a useful reference for the project. To my shame, I had never seen it, a mistake I swiftly corrected. I immediately saw that the designer was right, as the film’s setting of a single, large, empty location lit almost entirely by tungsten practicals in the public areas and fluorescents in the service areas has a lot in common with our intended look for this project.

I lost no time in passing the reference on to the gaffer, and to the director, who I spoke with on Friday. We discussed a number of general topics – approaches I think is the best word – and he updated me on some changes to the script.

I’ve been developing a large spreadsheet breaking the script down scene by scene, with basic info like location, time of day and a brief summary of the action, as well as notes on character, camera and lighting, and a couple of the most relevant reference images. This will get more detailed and specific as prep progresses.

Watching reference material is a big part of the process at the moment. As well as The Shining, I’ve recently checked out Alfonso Cuarón’s Roma, M. Night Shyamalan’s Servant, Ingmar Berman’s Fanny and Alexander, and I have Francis Ford Coppola’s Godfather trilogy on my list too. Shoot for the moon and you might land on the roof, right?

Finally, with the help of my 1st AC, I put a very rough camera list together. My hope is that soon I can conduct tests to make a final decision on camera and lenses.