One thing I often find myself struggling with as a filmmaker is clarity of motivation and storyline. It’s amazing how easily an audience can misinterpret something – or perhaps I should say how easily they can interpret it differently from the director, writer, etc. Here are some examples:

Audiences aren’t stupid; you just have to remember that they haven’t read the script, been on the set and worked on the edit for months. They’re coming to it completely fresh, and if the right clues aren’t in the film, they have little chance of interpreting it as you intended.

This is why test screenings are so important. Happily most of these types of issues can be resolved fairly easily by cutting something out or adding a line of ADR, but unless you show your edit to fresh eyes you probably won’t even know they are issues in the first place.

For more on test screenings and a sample report form, check out the blog post I wrote last summer about the Stop/Eject screenings.

Audience Interpretations and the Importance of Test Screenings

You can now download the script for Ghost-trainspotting, my Virgin Media Shorts entry for this year.

As promised, here is the VFX breakdown for the main shot of the ghost train in my recent Virgin Media Shorts entry, showing how a crude model shot can work a treat, given the right compositing:

Due to the looming nature of the competition deadline, this was a pretty quick and dirty shot. Having said that, my VFX skills are pretty limited and I doubt I could have significantly improved it even if I’d had more time. It took a couple of hours to set up and shoot the miniature, and no more than an hour to do the compositing you see above. (I re-used smoke footage shot for Soul Searcher.)

As always, my approach was low-tech, avoiding any CG elements, and I did all the compositing work in Final Cut Pro. Soul Searcher had loads of shots that utilised this low-tech method, creating effects with everything from indoor sparklers to milk being poured into a fish tank. You can see a breakdown of all those effects as part of the Deluxe Package rental of Going to Hell: The Making of Soul Searcher. And remember, if you embed this video on your own site, you get a cut of any sales made through it.

Last weekend I recorded the model shots for Ghost-trainspotting. The script was written with the train miniature from my 2005 feature film Soul Searcher in mind.

This model was built by Jonathan Hayes, with the wheels and linkages by my uncle and my late grandfather, and even some detailing by Yours Truly. If you’ve seen Going to Hell: The Making of Soul Searcher you’ll know what an absolute pain in the arse this train was to shoot back in the autumn of ’04. You can also check out the key blog entries here, here and here to experience the pain.

I’m pleased to report that filming the train this time around was considerably easier. The model has been sitting in my parents’ loft conversion for the last eight years, and that’s where I filmed it. All I had to do was rig some black drapes and line up the camera angles to the live action plates.

In the past, whenever I’ve needed to shoot a VFX element that had to match another, pre-existing element, I’ve used acetate. I would play back the existing element, typically a live action plate from principal photography, on a TV or monitor. I’d tape a sheet of acetate – the stuff teachers used to use on overhead projectors – over the screen and draw around the important landmarks with a felt-tip. Then I’d plug the camera into the same TV and adjust the camera angle until it matched the lines on the acetate. Low-tech, but effective.

Thanks to Magic Lantern – a firmware hack for the Canon HD-DSLRs – there’s now a more elegant solution. Magic Lantern provides a large number of handy features that Canon themselves were too tight or too lazy to include, but there are only two I regularly use: manual white balance, which lets you dial in the colour temperature in degrees kelvin, rather than relying on presets or holding up a white sheet of paper, and crop marks.

On Stop/Eject I used the crop marks to show us the  2:35:1 widescreen aspect ratio we were framing to, but you can actually overlay any monochrome image on the viewfinder by simply creating a .BMP image of the correct specifications on your computer and saving it to your SDHC card. So for Ghost-trainspotting, I loaded still frames from the two live action plates into Photoshop, and outlined them with the paint tool. After saving these outlines to the memory card as bitmaps, I could superimpose them on the Live View image on my Canon 600D’s flip-out screen. This made it a doddle to line up the shots.

So, the model shots are now in the can and yesterday I incorporated them into the film. I also tightened up the edit – finally getting it down to 2’20 exactly, including credits – mixed the audio and graded the images. The film is very nearly finished now; I’m just trying to decide whether to change the ending….

If you’re lucky, there may be a little VFX breakdown of the train shots coming in the next week or so. Meanwhile, here’s a nickel’s worth of free advice about shooting miniatures: 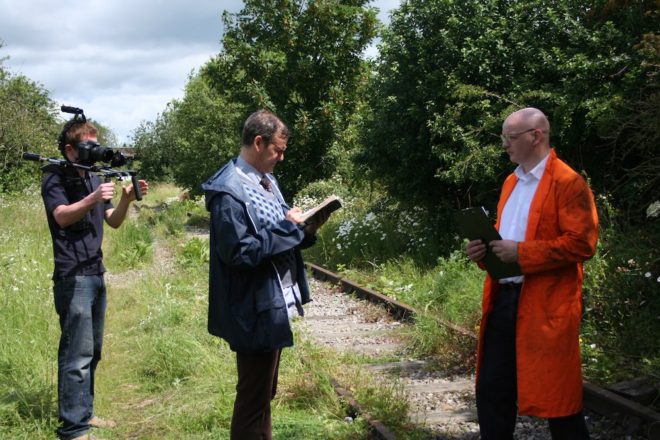 As part of my effort to actually make more films, and thereby make up for the six years I wasted trying to get The Dark Side of the Earth financed, in 2011 I started entering Virgin Media’s annual short film competition. Last year’s entry, The Picnic, didn’t get anywhere in the competition but did get randomly bought by an exam board.

This year I’ve written a script called Ghost-trainspotting, after wracking my brains to think of a location as convenient as the ruins over the road we shot The Picnic in, and finally hitting on the disused railway line a couple of blocks away. We’re shooting this Sunday with actors Rob Ashman (last seen in a Neil Oseman film as the prime minister in The Beacon) and George McCluskey, Colin Smith as DP, Sophie Black as designer, Ian Preece on sound and Katie Lake ADing and catering.

We fully expect to get rained on all day.