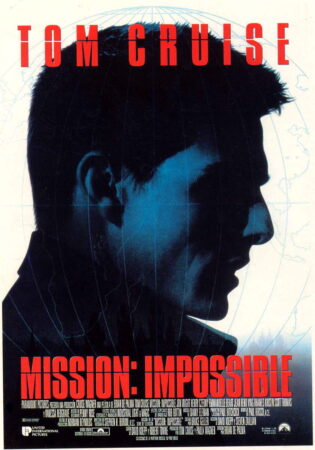 The seventh instalment in the Mission: Impossible franchise was originally scheduled for release this July. It’s since been pushed back to next September, which is a minor shame because it means there will be no release in 2021 to mark the quarter of a century since Tom Cruise first chose to accept the mission of bringing super-spy Ethan Hunt to the big screen.

Today, 1996’s Mission: Impossible is best remembered for two stand-out sequences. The first, fairly simple but incredibly tense, sees Cruise descend on a cable into a high-security vault where even a single bead of sweat will trigger pressure sensors in the floor.

The second, developing from the unlikely to the downright ludicrous, finds Cruise battling Jon Voight atop a speeding Channel Tunnel train, a fight which continues on the skids of a helicopter dragged along behind the Eurostar, ending in an explosion which propels Cruise (somehow unscathed) onto the rear of the train.

It is the second of those sequences which is a landmark in visual effects, described by Cinefex magazine at the time as “the dawn of virtual sets”.

“In Mission: Impossible, we took blue-screen elements of actors and put them into believable CG backgrounds,” said VFX supervisor John Knoll of Industrial Light and Magic. Building on his work on The Abyss and Terminator 2, Knoll’s virtual tunnel sets would one day lead to the likes of The Mandalorian – films and TV shows shot against LED screens displaying CG environments.

Which is ironic, given that if Tom Cruise was remaking that first film today, he would probably insist on less trickery, not more, and demand to be strapped to the top of a genuine speeding Eurostar.

The Channel Tunnel had only been open for two years when Mission: Impossible came out, and the filmmakers clearly felt that audiences – or at least American audiences – were so unfamiliar with the service that they could take a number of liberties in portraying it. The film’s tunnel has only a single bore for both directions of travel, and the approaching railway line was shot near Glasgow.

That Scottish countryside is one of the few real elements in the sequence. Another is the 100ft of full-size train that was constructed against a blue-screen to capture the lead actors on the roof. To portray extreme speed, the crew buffeted the stars with 140mph wind from a parachute-training fan. 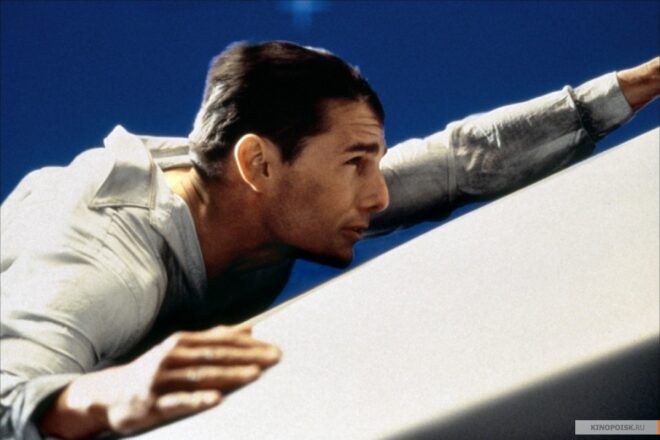 Many of the Glasgow plates were shot at 12fps to double the apparent speed of the camera helicopter, which generally flew at 80mph. But when the plate crew tried to incorporate the picture helicopter with which Jean Reno’s character chases the train, the under-cranking just looked fake, so the decision was taken to computer-generate the aircraft in the vast majority of the shots.

The train is also CGI, as are the tunnel entrance and some of its surroundings, and of course the English Channel is composited into the Glaswegian landscape. Once the action moves inside the tunnel, nothing is real except the actors and the set-pieces they’re clinging to.

“We cheated the scale to keep it tight and claustrophobic,” said VFX artist George Hull, admitting that the helicopter could not have fitted in such a tunnel in reality. “The size still didn’t feel right, so we went back and added recognisable, human-scale things such as service utility sheds and ladders.”

Overhead lights spaced at regular intervals were simulated for the blue-screen work. “When compositing the scenes into the CG tunnel months later, we could marry the environment by timing those interactive lights to the live-action plates,” explained Hull.

Employing Alias for modelling, Softimage for animation, RenderMan for rendering, plus custom software like ishade and icomp, ILM produced a sequence which, although it wasn’t completely convincing even in 1996, is still exciting.

Perhaps the best-looking part is the climactic explosion, which was achieved with a 1/8th scale miniature propelled at 55mph through a 120ft tunnel model. (The runaway CGI which followed Jurassic Park’s 1993 success wisely stayed away from explosions for many years, as their dynamics and randomness made them extremely hard to simulate on computers of the time.)

Knoll went on to supervise the Star Wars prequels’ virtual sets (actually miniatures populated with CG aliens), and later Avatar and The Mandalorian. Meanwhile, Cruise pushed for more and more reality in his stunt sequences as the franchise went on, climbing the Burj Khalifa for Ghost Protocol, hanging off the side of a plane for Rogue Nation, skydiving and flying a helicopter for Fallout, and yelling at the crew for Mission: Impossible 7.

At least, I think that last one was real.

“Mission: Impossible” and the Dawn of Virtual Sets 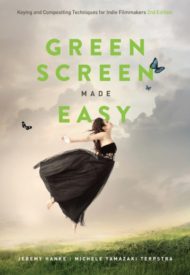 Micro-filmmaker Magazine’s Jeremy Hanke recently got in touch and asked if I would review his book, “Green Screen Made Easy”. I used to make a lot of micro- and no-budget movies packed full of VFX, but I usually avoided green-screen because I could never make it look good. Although those kind of projects are behind me, I agreed to the review because I figured that this book might help others succeed where I’d failed – and also I was interested to find out why I had failed!

What Jeremy and his co-author Michele Terpstra set out to do is to cover the entire process from start to finish: defining chromakeying, buying or building a green screen, lighting and shooting it, sourcing or shooting background plates, choosing keying software, and all aspects of the keying itself.

The book is aimed at no-budget filmmakers, hobbyists or aspiring professionals making self-funded or crowd-funded productions, those digital auteurs who are often their own producers, writers, DPs, editors, colourists and VFX artists. Perhaps you’ve tried green-screening before and been disappointed with the results. Perhaps you’ve always seen it as a bit too “techie” for you. Perhaps the unpaid VFX artist you had lined up for your sci-fi feature just pulled out. Or perhaps you’ve already reached a certain level of competency with keying and now you want to step up a level for your next production. If any of these scenarios ring true with you, I believe you’ll find this book very useful.

“Green Screen Made Easy” is divided into two halves, the first half (by Jeremy) on prepping and executing your green screen shoot, and the second half (by Michele) on the postproduction process. Both authors clearly write from extensive first-hand experience; throughout the text are the kind of tips and work-arounds that only come from long practice. By necessity there is a fair amount of technical content, but everything is lucidly explained and there’s a handy glossary if any of the terms are unfamiliar to you. 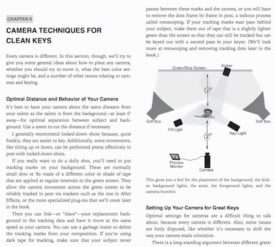 The section on lighting and shooting green screen material contained few surprises for me as a cinematographer – see my post on green screen for my own tips on this subject – but will be very useful to those newer to the field. The chapters on equipment are very thorough, considering everything from which camera and settings to choose to ensure the best key later on, to buying or building a mobile green screen, or even kitting out your own green screen studio – all with various alternatives to suit any budget.

The postproduction chapters revealed clearly why I struggled with keying in the past. Michele explains how the process is much more than simply pulling a single key, and can involve footage clean-up, garbage matting, a core key and a separate edge key, spill suppression, hold-out matting and light wrapping. The book guides you through all these steps, and outlines the pros and cons of the software and plug-in options for each step. 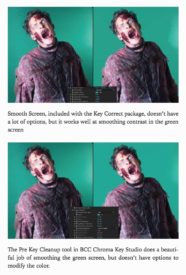 Once you’ve read this book, I’d say the only other thing you’ll need before you can start successfully green-screening is to watch some YouTube tutorial videos specific to your software. While the instructions in the book look pretty good (as far as I can tell without attempting to follow them) the medium of text seems a little restrictive in teaching what is inherently a visual process. There are explanatory images throughout “Green Screen Made Easy”, but in the ebook version at least I found it difficult to discern the subtle differences in some of the before-and-after comparisons.

Ultimately what will make you the best “green-screener” is practice, practice, practice, but by reading this book first you’ll give yourself a rock-solid foundation, an appreciation of the entire process from start to finish, and the insider knowledge to avoid a lot of time-sucking pitfalls. And keep it handy, because you’ll be sure to thumb through it and re-read those handy tips throughout your prep, production and post.

“Green Screen Made Easy” is available in paperback and ebook editions from Amazon.