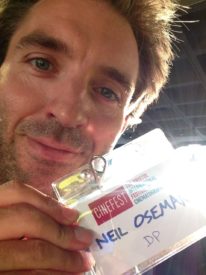 Back in 2008 I helped out briefly on a feature-length Lord of the Rings fan film called Born of Hope. Directing this epic production, producing it, financing most of it, and even acting in it, was the extremely tenacious Kate Madison. “It’s incredible to see what craftsmanship, sensitivity and attention to detail is being brought to bear on this ambitious project,” said Weta Workshop chief Richard Taylor. Check the film out below – it’s an impressive achievement. And it’s had a staggering 23 million views.

Kate is now embarking on a new project, a fantasy web series called Ren, and to mark the launch of its crowdfunding campaign she’s hosting a special webcast this Saturday night. The evening of entertainment will start at 8pm with a Born of Hope screening with live commentary from cast members. There will also be a live Q&A where they’ll answer your questions about BoH or Ren or whatever you’d like to ask. There will also be fun giveaways, live link-ups, special guests (including Yours Truly), and much more.

“I’ve been keen to get another project on the go and have been contemplating various formats,” Kate says. “Web series have become a popular medium for independent filmmakers and I find that the potential for shaping an ongoing storyline for, and with, the fans is very appealing”.

The series is named after its lead character, who lives a quiet life in a small village until dramatic events, involving an ancient powerful spirit and the ruling warrior order of the Ka’Nath, force Ren to leave her safe existence and find the truth behind the web of lies she’s believed in all her life.

“The inspiration for the show is very much rooted in great fantasy stories like The Lord of the Rings, but epic books and TV series like Game of Thrones and the more lighthearted Legend of the Seeker have also influenced me in the creation of Ren,” says Kate. She adds that one of the most important features of Born of Hope was the fan base that helped finance, design and even act in the film and that she is keen to involve the fans even more in this project. “The series is in the very early stages, with only the first season written, so we will look to the online fan community to influence what happens… and yes, even be in it!”

To watch the live event and to support Ren visit www.rentheseries.com/crowdfunding
An Evening of Entertainment from the Makers of Born of Hope

Yesterday I attended the Filmmakers Market at Bafta, a day of masterclasses, round-table discussions and one-on-one surgeries. Highlights included frank discussion about the ups and downs of directing with Bharat Nalluri (Life on Mars), Penny Woolcock (Tina Goes Shopping) and Neil Marshall (The Descent), and career tips from a panel comprising the NFTS, BFI, Film London and others. Here are the stand-out nuggets I took away from the event:

What do you reckon to this advice? What great tips have you heard for new and emerging filmmakers?