Recently, having put it off for as long as possible, I upgraded to MacOS High Sierra, the first new OS to not support Final Cut Pro 7. It was a watershed moment for me. Editing used to comprise at least half of my work, and Final Cut had been there throughout my entire editing career.

I first heard of Final Cut in early 2000, when it was still on version one. The Rural Media Company in Hereford, which was my main client at the start of my freelance career, had purchased a copy to go with their shiny Mac G3. The problem was, no-one at the company knew how to use it.

Meanwhile, I was lobbying to get some time in the Avid edit suite (a much hallowed and expensive room) to cut behind-the-scenes footage from Integr8, a film course I’d taken part in the previous summer. The course and its funding were long finished, but since so much BTS footage had been shot, I felt it was a shame not to do something with it.

Being 19 and commensurately inexperienced, I was denied time on the Avid. Instead, the head of production suggested I use the G3 which was sitting idle and misunderstood in one of the offices. Disappointed but rising to the challenge, I borrowed the manual for Final Cut Pro, took it home and read it cover to cover. Then I came back in and set to work cutting the Integr8  footage.

Editing in 2000 was undergoing a huge (excuse the pun) transition. In the back of the equipment storeroom, Rural Media still had a tape-to-tape editing system, but it had already fallen almost completely out of use. Editing had gone non-linear.

In a room next to the kitchen was the Optima suite. This was a computer (I forget what type) fitted with a low resolution analogue video capture card and an off-line editing app called Optima. In this suite you would craft your programme from the low-rez clips, exporting an EDL (Edit Decision List) onto a floppy disc when you were done. This you took into the Avid suite to be on-lined – recapturing just the clips that were needed in full, glorious, standard definition. You could make a few fine adjustments and do a bit of grading before outputting the finished product back to tape.

It wasn’t practical to do the whole edit on the Avid because (a) hard drives big enough to store all the media for a film at full rez weren’t really available at that time, and (b) the Avid system was hellishly expensive and therefore time on it was charged at a premium rate.

As I edited the Integr8 BTS on Final Cut Pro, I believed I was using an off-line system similar to the Optima. The images displayed in the Viewer and Canvas were certainly blocky and posterised. But when I recorded the finished edit back to tape, I couldn’t quite believe what I was seeing. Peering through the viewfinder of the Mini-DV camera which I was using as a recording deck, I was astonished to see the programme playing at the exact same quality it had been shot at. This little G3 and the relatively affordable app on it were a complete, professional quality editing system.

I looked across the office to the sign on the Avid suite’s door. It might as well have read: “DINOSAUR”.

Within a few months I had invested in my own Mac – a G4, no less – and was using FCP regularly. The next year I used it to cut my first feature, The Beacon, and three more feature-length projects followed in the years after that, along with countless shorts and corporates. Using FCP became second nature to me, with the keyboard shortcuts hard-wired into my reflexes.

And it wasn’t just me. Final Cut became ubiquitous in the no-/low-budget sector. Did it have its flaws? Definitely. It crashed more often than Richard Hammond. I can think of no other piece of software I’ve screamed so much at (with the exception of a horrific early desktop publishing app which I masochistically used to create some Media Studies GCSE coursework).

And of course Apple shat all over themselves in 2011 when they released the much-reviled Final Cut X, causing many loyal users to jump ship. I stayed well away from the abomination, sticking with the old FCP 7 until I officially quit editing in 2014, and continuing to use it for personal projects long after that.

So it was quite a big deal for me to finally let it go. I’ve got DaVinci Resolve installed now, for the odd occasion when I need to recut my showreel. It’s not the same though.

Timelines aren’t my world any more, light is, but whenever I look back on my years as an editor, Final Cut Pro’s brushed-aluminium interface will always materialise in my mind’s eye. 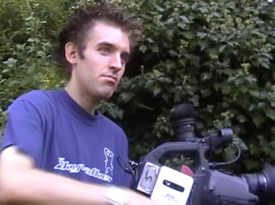 Last month saw the re-release of Reeltime Pictures‘ Daemos Rising, an unofficial Doctor Who spin-off film I photographed way back in 2003. It’s lovely to know that the film is popular enough for a high street release after so much time, and watching it again brought back many memories. Let the sharing of these memories commence…

2003 was Doctor Who’s 40th anniversary year, but the show had been off the air for over a decade and many fans, myself included, thought it would never return. In September I was weeks away from the start of principal photography on my second (and last) no-budget feature, Soul Searcher, but I was delighted to take a break from the stresses of self-producing to DP a tribute to the show I’d grown up with. “You won’t hear anything more from me now for a week,” I announced on my Soul Searcher blog on September 16th, “for I shall be ensconced in a cottage in a woodland area of Dorset (or possibly Devon – they’re easily confused), shooting a Doctor Who spin-off film for Reeltime Pictures. As you do.” 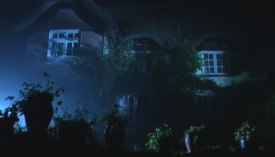 The location was in fact in Devon: the home of Ian Richardson, who has since sadly passed away. (Ian had an illustrious stage and screen career, including the lead role in the original UK version of House of Cards.) Although Ian’s involvement would be limited to a voiceover, his son Miles Richardson played the role of Douglas Cavendish, an ex-UNIT operative troubled by a time-travelling ghost, a creepy moving statue and of course the Daemons. For those non-Whoovers amongst you, the Daemons are a devilish alien race featured in a classic Third Doctor serial. Reaching its tentacles deep into the expanded Who-niverse, Daemos Rising was also a sequel to a prior Reeltime production, Downtime, and was tied in to a spin-off book series. 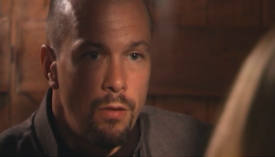 It was Miles who recommended me to director Keith Barnfather, having worked with me earlier that year on a feature called Blood Relative. Miles was joined on screen by his wife Beverley Cressman, playing Brigadier Lethbridge-Stewart’s daughter Kate. Rounding out the cast of three, as the aforementioned spectre, was Andrew Wisher, whose father Michael was the very first (and arguably best) actor to portray Dalek creator Davros.

The shoot didn’t start well. On the journey down to Devon, the prop shaft (bit that connects the engine to the wheels) dropped out of our rental van on the M5! Luis, the driver miraculously got us onto the hard shoulder while we still had some momentum, and the DVD extras include footage of us recovering as we awaited the RAC.

But this brush with death aside, I remember the shoot as a very happy one. It was a small team, just the three actors, Keith, his partner Anastasia, writer David J. Howe and his wife Rosie, and Luis on sound. We all stayed at the cottage, which was lovely, and enjoyed many a home-cooked meal and showbiz yarn. Miles and Andrew even gave an impromptu rendition of Billy Joel’s a cappella classic The Longest Time at one point.

It was the era of Mini-DV, so I was shooting on my Canon XL1-S in glorious 576i. (I remember the damp playing havoc with the DV tapes when we shot the third act in a cave system called Kent’s Cavern.) I also supplied the lighting package, which consisted of 2 x 800W Arrilites, 2 x 1000W Arrilites and a vintage 5K Mole Richardson fresnel. The latter required a local electrician to wire us a 32A socket into Ian’s fusebox! Back then I used only hard light because I didn’t know any better, and it gave everything a distinctive noir style. 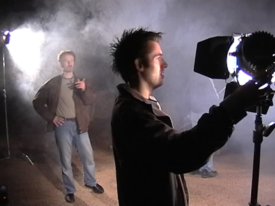 Speaking of a distinctive style, Daemos Rising is a significant milestone in my career because it was the first time I ever used smoke. The script called for spooky mist in several scenes, so Keith bought a Magnum 550 and we ended up using it on all the night exteriors. He kindly gifted me the machine at the end of the shoot, and needless to say I never looked back. Many a cast and crew may think of their poor lungs and rue the day that Keith Barnfather gave Neil Oseman his first smoke machine!

While the day interior lighting looks rough to me now, I think many of the night scenes still look pretty good 13 years on. Although my lamps were all tungsten, and the XL1 didn’t allow me to dial in a white balance, I would point the camera at something red and force the camera to white-balance on that, turning everything a nice James Cameron cyan. 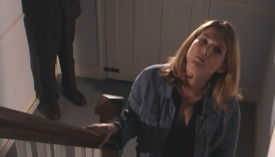 Just days after we wrapped, the BBC announced that Doctor Who would return in 2005. I fear the new generation of kids who now form the core of Who’s avid audience might find Daemos Rising a little slow and talky, but for fans of the classic series there is lots to enjoy. The tone and storyline are very Who, and there are several easter eggs scattered throughout the film. And some aspects of Daemos Rising fit the new series’ continuity too, including the Brigadier’s daughter Kate — now played by Jemma Redgrave – and UNIT’s Black Archive.

The re-release provides the opportunity to watch Daemos Rising in the aspect ratio we originally intended, 16:9 (the original DVD having been masked only to 14:9) and also offers the option of 5.1 surround sound. It’s available now from Amazon and high street retailers.