An article of mine from 2014 weighing the merits of shooting at 24 vs. 25 frames per second has recently been getting a lot of hits. I’m surprised that there’s still so much uncertainty around this issue, because for me it’s pretty clear-cut these days.

When I started out making films at the turn of the millennium, 25fps (or its interlaced variant, 50i) was the only option for video. The tapes ran at that speed and that was that. Cathode ray tube TVs were similarly inflexible, as was PAL DVD when it emerged.

Film could be shot at 24fps, and generally was for theatrical movies, since most cinema projectors only run at that speed, but film for television was shot at 25fps.

Three big technological shifts occurred in the late noughties: the delivery of video over the internet, flat-screen TVs and tapeless cameras. All of these support multiple frame rates, so gradually we found that we had a choice. At the start of a shoot, as a DP I would have to ask which frame rate to set.

Americans and others in NTSC regions are in a different situation. Their TV standard of 30fps has a discernibly different look to the international movie standard of 24fps, so the choice of frame rate is as much creative as it is technical. I don’t think anyone can tell the difference between 24 and 25fps, even on a subconscious level, so in Europe it seems we must decide on a purely technical basis.

But in fact, the decision is as much about what people are used to as anything else. I shot a feature film pilot once on 35mm at 25fps and it really freaked out the lab simply because they weren’t used to it.

And what people seem to be most used to and comfortable with in the UK today is 24fps. It offers the most compatibility with digital cinemas and Blu-ray without needing frame rate conversion. (Some cinemas can play 25fps DCPs, and Blu-rays support 25fps in a 50i wrapper which might not play in a lot of US machines, but 24 is always a safer bet for these formats.)

Historically, flickering of non-incandescent light sources and any TV screens in shot was a problem when shooting 24fps in the UK. These days it’s very easy to set your shutter to 172.8° (if your camera measures it as an angle) or 1/50th (if your camera measures it as an interval). This ensures that every frame – even though there are 24 of them per second – captures 1/50th of a second, in sync with the 50Hz mains supply.

The Times when 25fps is best

There are some situations in which 25fps is still the best or only option though, most notably when you’re shooting something intended primarily for broadcast on a traditional TV channel in the UK or Europe. The same goes if your primary distribution is on PAL DVD, which I know is still the case for certain types of corporate and educational videos.

Once I was puzzled by a director’s monitor not working on a short film shoot, and discovered that it didn’t support 24fps signals, so I had to choose 25 as my frame rate for that film. So it might be worth checking your monitors if you haven’t shot 24fps with them before.

Finally, if your film contains a lot of archive material or stock footage at 25fps, it makes sense to match that frame rate.

Whichever frame rate you ultimately choose, always discuss it with your postproduction team ahead of time to make sure that you’re all on the same page.

In the first two parts of this series we saw how exposure can be controlled using the lens aperture – with side effects including changes to the depth of field – and neutral density (ND) filters. Today we will look at another means of exposure control: shutter angle.

The Physical Shutters of Film Cameras

As with aperture, an understanding of what’s going on under the hood is useful, and that begins with celluloid. Let’s imagine we’re shooting on film at 24fps, the most common frame rate. The film can’t move continuously through the gate (the opening behind the lens where the focused light strikes the film) or we would end up recording just a long vertical streak of light. The film must remain stationary long enough to expose an image, before being moved on by a distance of four perforations (the standard height of a 35mm film frame) so that the next frame can be exposed. Crucially, light must not hit the film while it is being moved, or vertical streaking will occur.

The shutter spins continuously at the same speed as the frame rate – so at 24fps the shutter makes 24 revolutions per second. So with a 180° shutter, each 24th of a second is divided into two halves, i.e. 48ths of a second:

If you come from a stills or ENG background, you may be more used to talking about shutter intervals rather than angles. The two things are related as follows:

For example, 24 x (360 ÷ 180) = 48 so a film running at 24fps, shot with a 180° shutter, shows us only a 48th of a second’s worth of light on each frame. This has been the standard frame rate and shutter angle in cinema since the introduction of sound in the late 1920s. The amount of motion blur captured in a 48th of a second is the amount that we as an audience have been trained to expect from motion pictures all our lives.

Large shutter angles are less common, but the extra motion blur can imply a drugged, fatigued or dream-like state.

In today’s digital environment, only the Arri Alexa Studio has a physical shutter. In other cameras, the sensor’s photo-sites are allowed to charge with light over a certain period of time – still referred to as the shutter interval, even though no actual shutter is involved. The same principles apply and the same 180° angle of the virtual shutter is standard. The camera will allow you to select a shutter angle/interval from a number of options, and on some models like the Canon C300 there is a menu setting to switch between displaying the shutter setting as an angle or an interval.

When to Change the Shutter Angle

Sometimes it is necessary to change the shutter angle to avoid flickering. Some luminous devices, such as TV screens and monitors, or HMI lighting not set to flicker-free mode, will appear to strobe, pulse or roll on camera. This is due to them turning on and off multiple times per second, in sync with the alternating current of the mains power supply, but not necessarily in sync with the shutter. For example, if you shoot a domestic fluorescent lamp in the UK, where the mains AC cycles at 50Hz, your 1/48th (180° at 24fps) shutter will be out of sync and the lamp will appear to throb or flicker on camera. The solution is to set the shutter to 172.8° (1/50th), which is indeed what most DPs do when shooting features in the UK. Round multiples of the AC frequency like 1/100th will also work.

You may notice that I have barely mentioned exposure so far in this article. This is because, unlike stills photographers, DPs rarely use the shutter as a means of adjusting exposure. An exception is that we may increase the shutter angle when the daylight is fading, to grab an extra shot. By doubling the shutter angle from 172.8° to 345.6° we double the light admitted, i.e. we gain one stop. As long as there isn’t any fast movement, the extra motion blur is likely to go unnoticed by the audience.

One of the hallmarks of amateur cinematography is that sunny scenes have no motion blur, due to the operator (or the camera’s auto mode) decreasing the shutter interval to avoid over-exposure. It is preferable to use ND filters to cut light on bright days, as covered in part two of this series. 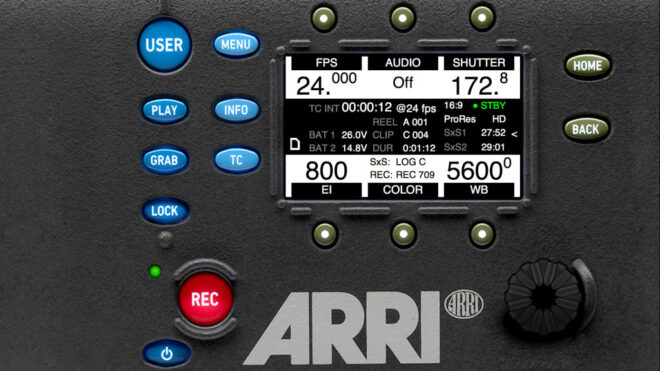 For the best results, the 180° (or thereabouts) shutter angle should be retained when shooting slow motion as well. If your camera displays intervals rather than angles, ideally your interval denominator should be double the frame rate. So if you want to shoot at 50fps, set the shutter interval to 1/100th. For 100fps, set the shutter to 1/200th, and so on.

If you do need to change the shutter angle for creative or technical reasons, you will usually want to compensate with the aperture. If you halve the time the shutter is open for, you must double the area of the aperture to maintain the same exposure, and vice versa. For example, if your iris was set to T4 and you change the shutter from 180° to 90° you will need to stop up to T2.8. (Refer back to my article on aperture if you need to refresh your memory about T-stops.)

In the final part of this series we’ll get to grips with ISO.

Learn more about exposure in my online course, Cinematic Lighting. Until this Thursday (19/11/20) you can get it for the special price of £15.99 by using the voucher code INSTA90.